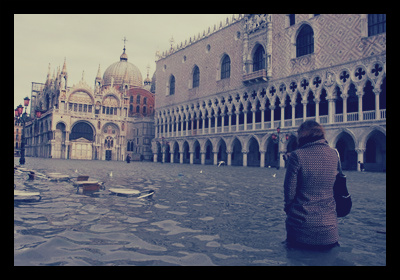 Developing countries with low national incomes are being hit the hardest by climate change. Rising sea-levels, storms and cyclones and high temperatures as a result of global warming are some of the consequences produced by climate change.

Climate change is defined as a shift in global weather patterns, largely due to man-made influences on the environment. According to a U.N. report, the average land and sea temperatures are expected to rise an additional four degrees Celsius; meaning, future temperatures can become warm enough to ruin agricultural sectors and impact ways of living. When land as well as sea temperatures warm, a spike in rainfall occurs, causing heavier storms with stronger monsoons and cyclones. Additionally, warming oceans result in melting glaciers and polar ice caps which cause rising sea-levels and coastal flooding.

In the past 50 years global temperatures have risen faster than any other time in history. Severe heat waves and droughts, due to warming, impact not only water and food sources but individual health as well. If exposed to heat waves for an extended amount of time, illness and death become likely. Diseases transmitted through food and water also increase since bacteria rapidly multiply when exposed to heat for a long period of time.

Additionally, poor crop yield due to droughts can cause increased hunger and famine. Droughts also cause a scarcity in water supplies that also contribute to poor health and hunger.

Storms such as cyclones and monsoons are being amplified as a result of climate change.

Developing nations such as the islands of Vanuatu are at an increased risk of such storms. Vanuatu has recently experienced its strongest cyclone yet. The storm caused coastal flooding due to rising sea-levels and has affected food supplies and destroyed around 90 percent of buildings in its country’s capital of Port Vila, according to The Guardian. The storm has affected business and employment as well, leaving many without jobs or homes.

According to National Geographic, since the 1990s, sea levels have been rising 0.14 inches per year. As sea levels rise each year, islands of developing nations are at risk of losing land to the sea.

For example, the island of Kiribati faces being the first country to become a refugee of climate change. Rising sea levels not only invade the land of Kiribati, but also drive its people into deeper poverty. The salt water that seeps into the land contaminates fresh water sources and kills crops that are needed for survival.

The South Pacific island nation of Vanuatu is reeling from the effects of Tropical Cyclone Pam, which hit the country late last week. The storm was a category five and was one of the strongest ever recorded. Its winds were sustained at 165 mph, with gusts exceeding 200 mph.

Every one of the country’s islands took a hit, and all 270,000 islanders have been severely impacted. The capital city of Port Vila has been crippled with 90 percent of its buildings sustaining damage. 15,000 of the city’s 40,000 residents are now homeless. But Port Vila was actually spared the worst of the storm.

The hardest hit islands are also some of the most remote and difficult to reach. The worst devastation has occurred in the south. More than 90 percent of all buildings have been completely destroyed on some of these islands. It has taken nearly a week to make contact with them and aid has yet to arrive. One remote island has reported that a lack fresh water is forcing residents to drink salt water.

NGOs say the logistics of delivering aid to Vanuatu are very difficult because so much of the country is remote and difficult to reach. Some are calling it the most difficult operation they have ever faced. Since most of the infrastructure has been destroyed, many runways are unusable and this has put many islands out of reach for airplanes delivering aid.

It’s currently peak season for tropical cyclones in the South Pacific and Vanuatu is certainly no stranger to them, nor is it unfamiliar with natural disasters. The country has constantly been ranked as one of the most disaster prone in the world. The United Nations University Institute for Environment and Human Security listed it number one in its world risk report of the world’s most disaster-prone countries, ahead of the Philippines and Tonga.

The reason it scores so high is due to its natural setting that is particularly prone to disasters and the fact that it is severely underdeveloped. Vanuatu is considered one of the world’s poorest and least developed countries. Its government is inefficient and known for corruption. 70 percent of the population lives in remote areas and has limited access to basic services or utilities.

The government has few resources of its own to cope with the disaster and much of what it did have was destroyed by the storm. The government has not been able to provide much assistance outside the capital and the international community has had to take charge of the relief effort.

Two-thirds of the population rely on agriculture to earn a living, but nearly all of the country’s crops have been destroyed by the storm. This means a large number of people are now in need of food assistance and have lost their livelihood. Most buildings are built of flimsy material and are not designed to cope with strong winds. Aid groups estimate that up to 150,000 people, more than half the population, are likely homeless.

A good early warning system and a good network of storm shelters have kept the death toll remarkably low. Only 11 deaths have been confirmed, but many more are missing and unofficial reports from some islands report over 40 deaths. The death toll is likely to rise as aid groups struggle to reach islands facing hunger and disease in the storm’s aftermath. Still, many consider it a miracle that the death toll is not in the thousands.