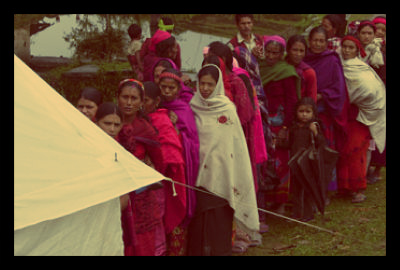 Nepal finds itself in the midst of a public health crisis for a sizable number of its female citizens. The crisis has its roots in poor preventative measures, but it mostly stems from the intolerable gender discrimination that many Nepalese women endure on a daily basis.

For instance, uterine prolapse, a condition that occurs when the uterus falls out of its normal position, is plaguing millions of women in the small nation. This condition is extremely painful and prevents many women from doing basic household duties.

In fact, its ubiquity is staggering: over 10% of 13.4 million women are affected by uterine prolapse.

The condition prevents many women from lifting heavy items which leads many to be ostracized within their own families. Since they are unable to do any intensive physical labor, they are seen as “lazy” by their families and therefore looked down upon.

Unfortunately, uterine prolapse can be traced to even greater gender discrimination pervasive within Nepalese society as a whole. Women generally have no say in when they marry, when to have children and how many children they desire to have. They are also denied basic birth control.

Bearing too many children in a short period of time is heavily associated with early onset of the condition. Generally, uterine prolapse is experienced by older women.

However, because of the lack of choice in having children at an early age, the condition in Nepal has been seen in women in their early 20’s. In a society that treats women as second class citizens, it is hard to imagine the number of avenues women are able to take in order to prevent uterine prolapse.

The government of Nepal has taken notice of the problem and was compelled to address the crisis once the Supreme Court mandated it in 2008. Unfortunately, the government response has been woefully inadequate.

There is a serious dearth of preventative measures in the government’s strategy. The main focus has been providing surgery for those who are already affected by the condition, which has done nothing to ease the discrimination responsible for its prevalence.

The quality of the government’s response to the crisis should not come as a surprise since the government has been in a state of flux since the monarchy was deposed in 2008. Since then, an interim constitution has been created to govern the country.

Political bouts within the government have left many stuck in a cycle of poverty. In fact, over one-quarter of the Nepalese population survives on just $2 per day.

The situation underscores how institutionalized discrimination leads to more than just decreased social stature in one’s society. There may be other examples around the world illustrating the health effects discrimination has on powerless individuals.

Hopefully an effective governing body can be solidified to aid the women of Nepal.