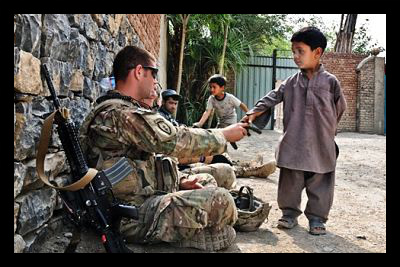 Preliminary results of the Afghan election, reported by the Afghan Independent Election Commission on Monday July 7, threaten to create further chaos in the country. The situation prompted U.S. Secretary of State John Kerry to warn on Tuesday that “Any action to take power by extralegal means will cost Afghanistan the financial and security support of the U.S. and the international community.”

The results declared Ashraf Ghani in the lead of his opponent Abdullah Abdullah, sparking demonstrations from both parties claiming the elections to be marred by fraud. Repeated statements from election officials that the results are not final have done little to quench the protests.

Mr. Abdullah’s camp has spent the days since the reporting of the preliminary results building support for a parallel government. Claims that the election was engineered by Mr. Ghani, the election officials and current President Hamid Karzai have been made by allies of Mr. Abdullah.

“From this moment on, we announce our own legitimate government led by Abdullah Abdullah,” writes Atta Mohammed Noor, governor of Balkh Province, on Facebook.

Mr. Abdullah himself has urged his supporters to wait before taking action. He addressed a gathering of his leading supporters on Tuesday: “We are the winner of this round of elections without any doubt. I ask you to give me a few days to consult and speak.” This speech was delivered after a portrait of Hamid Karzai was torn down by his supporters while they cried: “Death to Karzai.”

Financial Times quotes Kate Clark, a senior analyst at the Afghanistan Analyst Network: “the election has thrown up ‘a lot of combustible material’ that both candidates had stopped just short of lighting.”

President Obama has personally phoned both candidates, telling them explicitly that violence or illegal action will cause the U.S. to withdraw all aid from Afghanistan. While both President Obama and Secretary Kerry have voiced their support for a thorough election audit, the threat of rescinding support makes clear the U.S.’s position on any action taken by either side outside the limits of the law.

The U.S. has been a strong financial and security backer for the Afghan government. The United States Agency for International Development is one of the agencies working to improve conditions in Afghanistan. In aggregate, since 2002, USAID has spent $13 billion on programs in the country. Economic growth has stabilized at nine percent per year, eight million children are enrolled in school—including 2.9 million girls—and 60 percent of the population lives within access of health services, since the fall of the Taliban.

U.S. aid is vital to the survival of a country where 50 percent of the population lives in poverty and 7.5 million are food insecure.

“America does have a stake in Afghanistan—and Afghanistan still needs America,” Kate Clark sums up the situation.