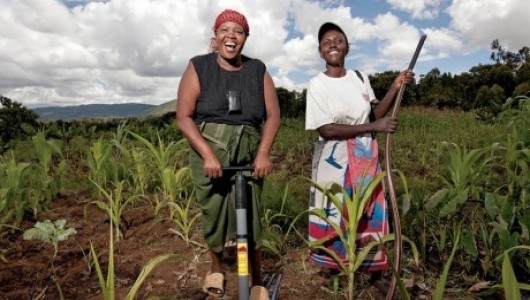 USAID’s mission to fight global poverty has just received significant support with the recent addition of the Global Development Lab. USAID has long been the leading government agency seeking to alleviate poverty, yet their mission has primarily been that of implementation. The agency is now not only committed to the physical deployment of aid, but also the development of future relief systems.

Founded in April of 2014, the new subdivision seeks to change the ways in which aid is delivered and developed. According to the official website, “The U.S. Global Development Lab is a new entity within USAID that brings together a diverse set of partners to discover, test, and scale breakthrough solutions to achieve what human progress has only now made possible—the end of extreme poverty by 2030.”

The Global Development Lab is bringing the fight against extreme poverty into the 21st century information age. Its aim is to use strategies that top technology companies have used, such as crowd sourcing, big data collection, and constant research and development to find the best solutions in terms of ending extreme poverty.

USAID has appointed Ann Mei Chang as Executive Director for the Global Development Lab. Chang worked for twenty years in Silicon Valley, spending eight of them working for Google as lead engineer of its mobile division. With both experience in the technology and nonprofit sectors, Chang brings a fresh outlook on new ways to implement global development.

The lab is revolutionary in its mission to use resources and partners from both the public and private sectors. The Global Development Lab is partnered with technology companies that are synonymous with innovation. Microsoft, Intel and Nike are listed as cornerstone sponsors. Many of the nation’s top universities, including the University of California, Duke and the Massachusetts Institute of Technology, have also partnered with the lab. USAID hopes that these partnerships will “leverage the combined skills, assets, technologies, and resources of the public, private, and nonprofit sectors to deliver sustainable development impact.”

USAID and its new Global Development Lab are not only attempting to alleviate extreme poverty through donations and other tried methods, but the agency is now attempting to end the suffering of millions around the globe by seeking cutting edge solutions through science, innovation, and collaboration. 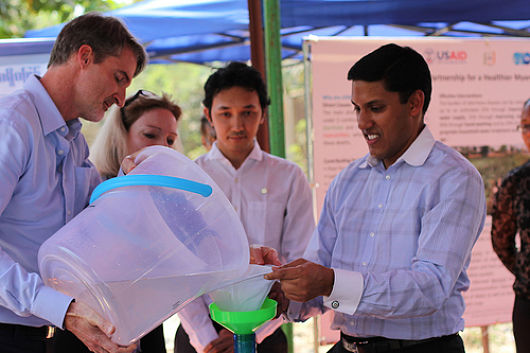 As an entity within USAID, the U.S. Global Development Lab seeks to end global poverty by testing scientific and technological solutions. However, an additional factor is crucial to achieving such a goal, as demonstrated by USAID’s immense impact over time — partnerships.

Known as Global Development Alliances, partnerships between USAID and private sector organizations are meant to combine corporate interests with global development goals. The influence of these partnerships extends much further than the impact of just one organization alone. In total, USAID has formed over 1,500 partnerships with corporations, foundations, universities and local businesses.

One of the most successful partnerships within the U.S. Global Development Lab includes Fighting Ebola: A Grand Challenge for Development with Contributions by the CDC, the USAID Global Health Bureau, the White House Office of Science and Technology Policy and the U.S. Department of Defense. The result was a protective suit to be worn by health care workers.

Ann Mei Chang, executive director of the U.S. Global Development Lab, finds promise in collaborative action. “The day is over when there’s one game in town,” said Chang, who was a Google executive and engineer prior to being hired by USAID. “Partnerships are crucial. Ideally, USAID will be more of a catalyst for solutions than a lone provider.”

The profound impact of partnerships will not dwindle any time soon. Recently, Chang headed to Chicago to meet with businesses willing to contribute their technical findings to halting global poverty.

Included in the roundtable discussion was ReliefWatch, a cloud-based system made for health centers in developing countries to easily track medical supplies and disease outbreaks. The simple process requires clinic workers to make daily recordings of the supplies that they need. Immediately, supporting organizations receive the information and subsequently send the necessary provisions. No Internet connection is required, and because 90 percent of people in the developing world own cell phones, the system is readily accessible. Daniel Yu, the program’s developer, is hoping to expand operations to aid in food disasters as well.

LuminAID, a startup that makes inflatable solar-powered lighting systems, also attended Chang’s partnerships meeting. LuminAID was developed after Haiti was devastated by an earthquake in 2010 when the creators, Anna Stork and Andrea Sreshta, saw access to light sources just as important as access to food, water and shelter. Stork and Sreshta found that there were no lighting systems compact enough to be sent in bulk to countries in need; 50 solar lights can be packed in the amount of space needed for eight flashlights. They soon developed the waterproof, inflatable LED balloon that is solar-powered. Since its start just five years ago, LuminAID has reached 50 countries.

While both USAID and businesses across the country are capable of making a difference on their own, partnerships between the two make for a stronger effort to ending global poverty.

The U.S. Global Development Lab is a new entity within USAID, and it is partnering with former U.S. Secretary of State, Hillary Clinton. The Lab places an emphasis on using technology to fight poverty and help the poor. USAID plans to solve the issue of extreme poverty across the globe by 2030, and believes a high-tech approach is the way to make that happen.

The program is taking a more holistic approach in working with cross-sectoral partners for studying issues, engineering solutions and financing projects. This model is not only designed to work with key players in the private sector, but NGOs and universities as well. In total, the program is a partnership between USAID and 31 corporations, foundations and universities.

The Lab says this approach will lead to breakthrough innovations and development solutions in even quicker, cheaper ways. For the first time in human history, technology is advanced enough to address the issue of extreme poverty across the globe and eradicate it in less than two decades. So far, efforts worldwide have achieved Millennium Development Goal #1 by halving the number people living in extreme poverty (less than $1.25 per day,) putting the total at 1.2 billion.

Although the current sum of extremely impoverished people is 700 million down from 1990, which is an average of 29.2 million per year, the pace of progress needs to double in order to lift at least another 1 billion people out of extreme poverty.

USAID administrator Dr. Rajiv Shah and former undersecretary for the U.S. Department of Agriculture sees the brilliance in marrying agricultural development and high tech efforts to help poor communities across the globe. This approach is currently sweeping Africa as new tech-centric aid innovations increasingly pop up in the area with the help of mobile phones.

“I said, look, if we could get and invent new seeds, new mobile technology and open new data centers to help farmers connect their crop prices and understand weather variability, we can do something transformational against hunger,” says Shah. “And not just reach a small percentage of the people that are hungry with food.”

While Shah was working to improve agricultural efforts using science and technology to fight poverty, Secretary Clinton was working up a global fund initiative. Shah proposed they partner in their efforts, setting a strong base for collaborative efforts.

USAID spent $127 million on scientific developments in 2008 and almost $800 million in 2013. Now, with the U.S. Global Development lab, they expect as much as $30 billion in individual investment in technology to help the poor over the course of the project with the help of their partners.