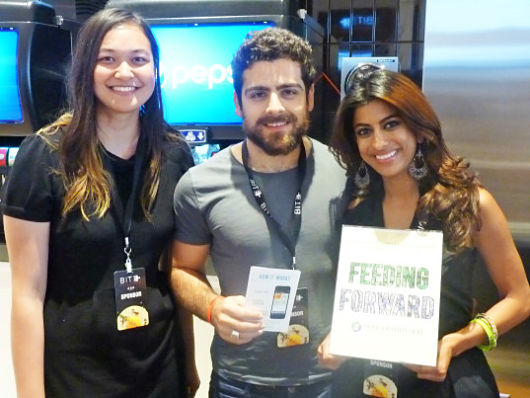 According to the US Environmental Protection Agency, ranking behind paper, food is the second largest source of waste.

Twenty-five-year-old Komal Ahmad, who graduated from the University of California at Berkley in 2012, is solving this problem by feeding millions of people with her phone app, Feeding Forward.

In 2011, Ahmad was approached by a homeless man who asked her for money. Instead of cash, Ahmad offered to take him to lunch. As they ate, she discovered he was a returned soldier who, after some bad luck, now made his living begging on the streets.

Ahmad was overwhelmed by his situation. Determined to help others like him, she started a program at UC Berkley where cafeterias donated excess food to homeless shelters. Soon after, the program expanded to 140 colleges across the United States.

But Ahmad didn’t stop with the food recovery program.

“Imagine a football stadium filled to its brim,” Ahmad says. “That’s how much food goes wasted every single day in America.”

In 2012, Ahmad collaborated with a developer and they launched the Feeding Forward mobile app in 2013. The app originally targeted restaurant owners and event planners in San Francisco who could use the app to donate leftover food to homeless shelters. By entering their location into the app, a Feeding Forward driver picks up the leftover food and delivers it to shelters in the area.

In addition to the app, Feeding Forward has its own website.

Since Feeding Forward launched, Ahmad has recovered more than 691,896 pounds of food, which fed more than 570,000 people.

Now the CEO of her nonprofit organization, Feeding Forward, Ahmad says, “We need to figure out how to establish sustainable solutions that can distribute the food we already have faster and get it to people who need it faster and safely.”

Ahmad’s mobile app is proof that quick and successful distribution can feed the hungry.

Around the world, the Feeding Forward app is praised and desired.

“I didn’t expect it to blow up,” Ahmad says. “People as far as Nairobi, Bangalore and Hong Kong have wrote us asking us to expand Feeding Forward to their cities and countries. They’re like, ‘Tell me what I can do to get it here.’”

The mobile app is currently being revamped. It will be available again in August 2015. The website, however, is still up and running.

Feeding Forward offers hope for other countries struggling with hunger and food distribution.

Ahmad says, “These are huge cities that have absurd amounts of food thrown away every day. We are trying to make the Bay Area a case study to say ‘Hey, if it works here, it can work anywhere.’”