Tag Archive for: US Army 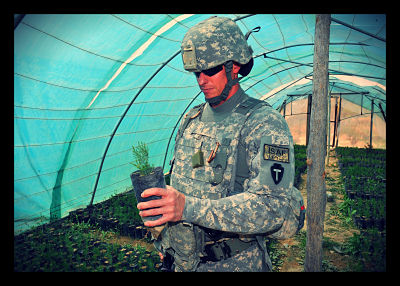 For the past 12 years, the US Army has primarily been assigned to the role of peacekeeper in support of the NATO led military operations in Afghanistan. Subsequently, as the security operations draw to a close and military personnel began a phased withdrawal, coalition forces have a renewed focus on the long-term economic benefits of sustainable farming in Afghanistan. Sadly, many of the invaluable skill sets necessary for high yield farming have been lost, a consequence of the frequent military incursions that have occurred over the last half-century. In an effort to both ameliorate local poverty levels and build agricultural capacity, NATO is calling for the US Army to encourage food security in Afghanistan.

Soldiers of the 5-19 Agribusiness Development Team of the Indian National Guard have spent the last year instructing Afghan farmers of the Khowst Provice in the basics of farming. What tasks are being covered in the course curriculum? Army instructors are focusing on row planting, pest control, livestock care, and green house management; all important techniques that will enable farmers to increase crop yields and pass along the requisite knowledge, skills, and abilities of sustainable farming to future generations. Thus far, the program assigning the US Army to encourage food security in Afghanistan has reaped substantial dividends, with local farmers taking pride in their yearly harvests and neighboring villages working towards the purchase of farm equipment in the near future.

In regards to the policy calling for the U.S. Army to encourage food security in Afghanistan, U.S. Army Major Gregory Motz noted that, “This is the best job I have had in the Army. To be able to see the progress the Afghans have made in a year and know that it isn’t because we did it for them, but with them…The agricultural community in Khost has made leaps and bounds in the last five years. It is really exciting to be part of that.”

A program calling for the U.S. Army to encourage food security in Afghanistan is a much needed reason to be optimistic about the future of the war torn nation, as the economic opportunities afforded by a newly invigorated agricultural industry will serve as positive legacy that will outlast the violence of the last decade. Furthermore, by laying the necessary groundwork required for a rich food security program to take hold, the citizens of Afghanistan can look forward to a future high in agricultural sustainability and economic development.