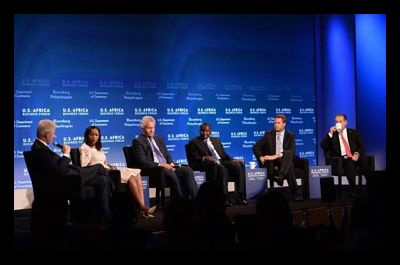 The U.S. government has announced that businesses here will be investing $14 billion in African industries. Investment was previously unsupported by President Obama. The news was released on the second day of the U.S.-Africa Leaders Summit in Washington, D.C.

These investments will span industries such as construction, clean energy, banking and information technology. Previously, the main U.S. investments had been in oil and gas, so businesses are making an effort to focus on new sectors.

Africa is in the middle of a highly prosperous time with fast economic growth, and the U.S. recognizes that. It is home to six of the world’s fastest growing economies, and has developed a strong middle class with significantly higher spending power now than in 2000.

The International Monetary Fund is predicting that Africa will see a 5.8 percent growth in 2014. John Kerry, the U.S. Secretary of State, said that Africa could be “the marketplace of the future,” and that it is experiencing “amazing opportunity.”

The U.S.-Africa Leaders Summit is a program where representatives from nearly 100 American and African businesses gather to discuss how to boost economic partnerships. China has recently become Africa’s top trading partner, and the U.S. hopes to recover that title.

Former New York City major and billionaire businessman Michael Bloomberg said, “We also realize we have some catching up to do … We are letting Europe and China go faster than the U.S.”

Keeping these things in mind, the U.S. is striving to make its impact in African businesses. Investing in Africa is highly beneficial for the United States because it will create strong economic ties and will boost the relationship that the two areas already have.