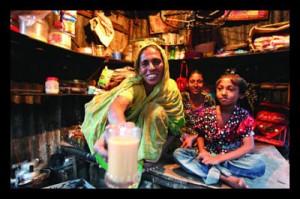 A story of poverty reduction in Bangladesh has come in second place in an annual U.N. Development Programme Competition. The purpose of the competition was to capture the result of transformative development in a story. “These stories highlight UNDP’s critical work on poverty reduction, democratic governance, crisis prevention and recovery and the environment and sustainable development,” said UNDP chief Helen Clark.

The story involves Shyamola Begum of Dhaka and how she managed to support herself and her two children after her husband left her. Shyamola’s situation is not uncommon in Dhaka. Every year, tens of thousands of women are left by their husbands who have given up hope in the face of poverty and lack of employment opportunities. However, after receiving an entrepreneur grant of roughly $30 from the UK’s Urban Partnerships for Poverty Reduction fund, Shyamola was able to open a tea stall. In just a few months, she had more than doubled her investment.

Her success is also not uncommon. Over the past five years, 55,000 families like Shyamola’s all across Bangladesh have received similar assistance from UPPR, the largest urban poverty reduction initiative in Bangladesh. Over the past decade, Bangladesh’s poverty has decreased by half, 90 percent of young girls are enrolled in schools and child mortality has gone down by 60 percent.

Regarding the UNDP stories, Clark said, “They remind us that people are and always will be the center of UNDP’s work.”