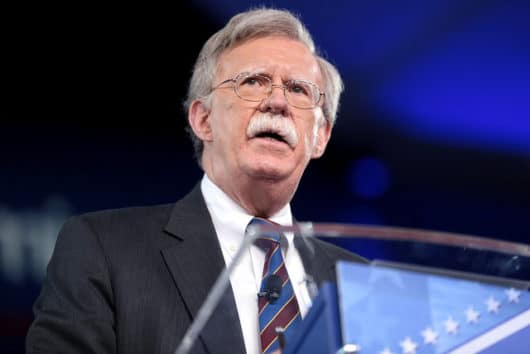 The National Security Advisor for the Trump Administration, John Bolton, unveiled the new strategy for the U.S. aid and investment in Africa in a speech at the Heritage Foundation in Washington D.C. During the speech, Bolton outlined what the new U.S. Africa strategy will look like. It has three main focuses: advancing U.S. trade and commercial ties, countering Islamic terrorism and making sure that U.S. dollars are used efficiently and effectively. In the text below, the three main objectives of the new U.S. Africa Strategy are presented.

Advancing US Trade and Commercial Ties

Bolton stated in his speech that the United States plans on providing assistance to “key countries” and strategic objectives, with U.S. economic interests at the forefront of any aid given, unlike previous administrations, whose objectives in providing aid were focused on sustainable growth for African countries. In order to achieve this goal, the U.S. plans on enacting a new initiative called “Prosper Africa.” This initiative will focus on growing the African middle class, improving the business climate in the region, and supporting U.S. investments. No details on how the initiative will be implemented were given.

The second objective of the new U.S. Africa strategy is to counter Islamic terrorism in Africa. Bolton highlighted three nations specifically: Mali, Libya and Sudan, where Al-Qaeda and ISIS affiliates have taken hold. Rather than giving money or aid directly to fighting the radical groups that have taken hold in these and other nations in Africa, the new plan will focus on strengthening the economies of African nations. This will allow African nations to be more self-sufficient and will make them better prepared to address a range of security threats, including terrorism.

The goal of the Trump administration in the new U.S. Africa strategy is to help African nations become more self-sufficient and better able to take ownership of the security of the region. This strategy is closely aligned with the Department of Defense’s plans to reduce troop presence in Africa by 10 percent.

In his speech, Bolton stated that the new U.S. Africa strategy will revisit the foundational principles of the Marshall Plan. Enacted in 1948 after World War II, The Marshall Plan was an American initiative to give aid to and help rebuild Western Europe. It legitimized U.S. foreign aid programs and opened markets for American goods. One way in which the Trump administration plans on making sure U.S. dollars are being used effectively and sticking to the principles of the Marshall Plan is by bypassing the United Nations. Coincidentally, the government will also reevaluate its support of U.N. peacekeeping missions.

What this Means for Africa

The economic focus of the new strategy has the potential to improve conditions in Africa. Under the new U.S. Africa strategy, United States aid must be invested in health and education, transparent governance and follow the rule of law. If these tenets are followed, the strategy may help African nations to become more self-sufficient and therefore better equipped to handle their own security issues.

Unfortunately, Bolton provided few details as to how the government plans on making sure the tenets are upheld. More information and examples of how the U.S. Africa strategy is to be enacted are needed to know if the new Africa strategy will be beneficial to all African nations.