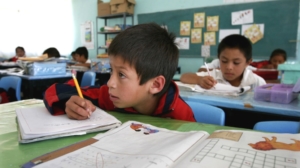 Improving education has been a consistent focus throughout Mexico for decades. Both the former and current presidents have created, stripped and appealed legislation in efforts to strengthen the education system. Two opposite reform strategies and impassioned teachers alike advocate the importance of progress, but the country’s previous president failed to truly achieve this goal. Education reforms in Mexico remain a top priority for the country, but the new president may fall short in a different way than his predecessor.

Even compared to the most economically disadvantaged children across the world, Mexican children are still academically outperformed—including the few who fall above the poverty line. Ranking last out of the 35 OECD countries in education, children in the Mexican school system have the least proficient math, reading and literacy skills. This trend is not surprising: 20% of schools lack the basic necessities to operate including running water, food and furniture. There are buildings still in ruins from earthquakes dating back to 2015, and these conditions are amplified in the poorest states like Oaxaca.

Despite education being unversially free, up to 13% of children—over one million students—can not afford the supplies and transportation necessary to attend school. Less than 50% of students that attend public school graduate high school and only 60% are enrolled in primary school systems.

Native Mexican children are hit hardest in terms of education. Although the country is home to nearly 1.3 million children speaking native languages, only 55,000 teachers are fluent in these languages. In addition to this stark language barrier, systemic racism conducted by teachers against native children is also a persistent yet largely ignored issue.

Education reforms in Mexico are at a standstill due to a failing economy, cyclical poverty and corruption. Prior to 2013, the teachers’ union had full control of choosing teachers. Rather than base staff selection on classroom results or experience, hiring was based upon union involvement. The union allowed teachers to sell their positions to anyone with no questions asked and granted life-long job security to teachers with failing grade averages.

Surprisingly, Mexico’s teacher salaries are close to $50,000 per year, making teaching a highly sought after job. The first-ever education census in 2014 revealed that the corrupt union leader Elba Esther Gordillo, who was imprisoned for embezzlement in 2013, allowed 39,000 ‘ghost teachers’ on payroll including teachers who had died, who never appeared in a classroom or who did not exist at all. This expenditure totaled $1.2 billion.

In 2013 former president Peña attempted to rebrand education reform in Mexico by stripping the unions of their power. Peña gave the power to a body of the government that enacted rigorous assessments and exams. Teachers were subjected to three annual assessments and if they did not pass they were moved to an administrative job or let go. Despite the positive attempts at change, the legislation was met with opposition due to the recourse from poor evaluations and the integration of merit-based promotions.

Yet, none of the approved legislation addressed the needs of the schools themselves. Less than 7% of the GDP funding in 2016 was spent on schools both private and public. There has been no effort to supply teachers with the proper equipment or tools to give basic educational lessons. Only 5% of public spending went into the school systems; both percentages are far below the recommended percentage allocated to schools.

Last year, President Andrés Manuel López Obrador—also known as AMLO—was elected with a platform heavily focused on repealing the old school system. His campaign rallied around education reform in Mexico, placing it at the forefront of his first actions in office. In practice, the new legislation follows the same basic school structure and gives power to the unions that hired teachers; however, it is novel in that it eliminates teacher evaluations. Overall, this new system has received both praise and criticism from the people of Mexico. AMLO’s reformed plan aims to broaden school curricula by adding music, art and cultural studies to classrooms, rather than continuing to focus exclusively on STEM and humanities. Many of Mexico’s constituents believe this expansion of course offerings will remove limitations on children’s abilities to express themselves creatively.

Teachers are the backbone of education. However, without proper funding, resources and training, education reforms in Mexico are stuck in the recurring failures of the country’s leaders. Recent legislation has only shifted power from unions to the government and back to the unions. Without allocating money to the schools themselves, proper education for the children of Mexico will remain out of reach, leaving over half the population with a limited educational experience and overall quality of life.