Tag Archive for: Undetonated Mine Fields 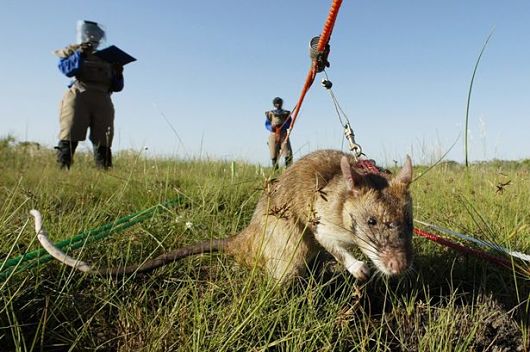 An unlikely candidate to saving lives comes to mind when looking at the Gambian pouched rat. Almost blind, but with an extraordinarily strong sense of smell, these rats can detect the most minute odors that can lead to saving human lives.

With this unique sense of smell, these rats in rural Africa are being trained to detect land mines in Africa that are remnants of civil war. Being light enough to not trigger the mines, these rats can sweep over a minefield quicker and more effectively in two hours than the traditional 2-3 days through the human method of metal detectors.

Mine-laying became a common military practice in the late 1970s, and while thousands of mines may have been laid, very few were actually detonated during wars. In countries like Cambodia, mines that have been unaccounted for have have lead to 64,00 casualties since 1979, as well as 25,000 people living with amputations.

As land mines are a hidden threat, they pose a danger to unsuspecting passersby; children on their way to school, and men and women just doing their daily tasks, can all be susceptible to this realistic terror. This is why training the Gambian rats is so useful and important to these rural areas.

With this keen sense of smell, researchers have found that they can not only detect the minute smells of land mines, but can also detect diseases like tuberculosis faster and cheaper than with a laboratory microscope. The rats are able to do this by smelling the bacteria that lives within an infected person.

This amazing realization has saved thousands of dollars for developing countries as the World Health Organization’s current endorsed detection machinery, which costs $17,000 with each individual test requiring $17 for equipment.

Studies have recently suggested that the Gambian pouched rat can do even better. With its keen, sensitive sense of smell and ability to be trained, the future possibilities for the functionality of this amazing animal are astounding.