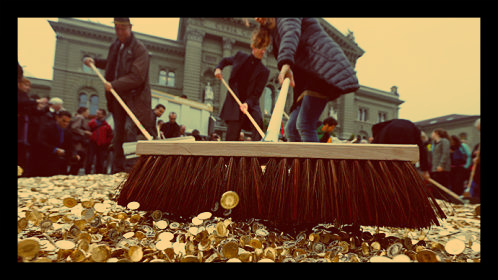 The movement fell short of their goal to reach the one million signatures needed for the European Commission to “win their consideration of unconditional basic income as a new form of ‘emancipatory welfare.” However, the initiative was brought to Switzerland, where it managed to get 100,000 signatures.

Unlike the United States—where most legislation has to pass through representatives to be implemented—popular initiatives in Switzerland are able to gain more ground. The proposal is also possible because the Swiss political system allows for a very direct form of democracy. Moreover, unconditional basic income is part of a larger movement across the globe to address the pressing issue of rampant economic inequality.

The people of Switzerland have been successful in introducing legislation that would limit the salary of CEOs to “12 times the salary of the lowest paid employee.”

Considering how unconventional the proposal is—in which the suggested amount of $2,800 a month would be unconditionally provided to the people of Switzerland—gathering the votes required is considered to be a long shot. But, the movement represents a rapidly growing public concern.

It aims to account for some of the 21st century problems that arise due to a capitalist mode of economy.

For instance, the unconditional basic income initiative would allow for jobs to be distributed more widely and equally. Currently, France has three million people who are jobless and five million people working more than necessary. This sort of unequal employment distribution in France is also evident across nations on an international scale.

There is an element of controversy to the movement though, where debates regarding human rights and entitlements circulate the issue. The initiative reflects a strong public opinion however, in which human nature is regarded as creative as opposed to lazy. It would allow for people to have the tools to realize their potential and have a dignified existence, rather than being left out of what society has to offer.

As stated by a leader behind the unconditional basic income initiative, “This would lead to a paradigm change.”