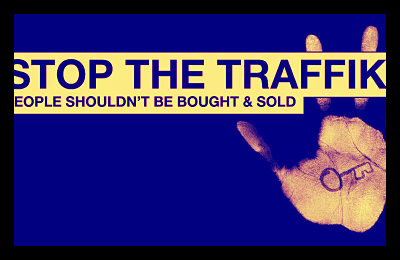 Phil Lane was working at a day center for vulnerable children in Mumbai that offered refuge for those living in slums or on the platforms of a nearby train station when he first witnessed the all-too-common realities of human trafficking. He was concerned when a 7-year-old and 9-year-old brother and sister who lived near the day center and had been attending with their parents for months suddenly stopped coming. Phil found the father to ask if they were alright, and was told that the two children had been sold to a man who offered them work for about 20 dollars.

The children were never seen again, a terrible but common reality for many in the area. Deeply affected by what he saw, he joined efforts with several global United Kingdom organizations who wanted to work together to commemorate the abolition of the slave trade, and Stop the Traffik was born.

Trafficking is the practice of buying and selling people against their will to be transported into slavery for sexual exploitation, forced begging or labor, for removal of organs or sacrificial worship, or as child brides, domestic workers or into circuses or sweat shops. It is often violent, and victims suffer physical abuse and threats to themselves and their families as means of coercion and control by their traffickers. Alarmingly, it is also the fastest growing global crime. At any given moment, 9.1 million men, women, and children are trafficked.

Stop the Traffik is a London-based international organization comprised of individuals, communities and organizations dedicated to stopping human trafficking. The organization has about 45,000 members in countries all over the world; it partners with the U.N. Global Initiative to Fight Human Trafficking (UN.GIFT) to take both local and global action.

Stop the Traffik initially began as a two-year initiative to accomplish two goals. The first goal was to mark the bicentenary of the abolition of the transatlantic slave trade by hosting a Freedom Day on March 25, 2007. The second goal was to make a worldwide declaration to present to the U.N. to prevent the sale of people, to protect victims of trafficking and to prosecute the traffickers.

When the declaration garnered over 1.5 million signatures, it was clear that the two-year campaign had the support to grow into an independent organization. Stop the Traffik founder Steve Chalke became a U.N. advisor on Community Action Against Trafficking.

Today, the organization is a growing global movement that seeks to educate and inform activists to make a difference in their communities around the world. Stop the Traffik works with individuals and organizations to address human trafficking on both a local and global level.

Locally, Stop the Traffik seeks to make trafficking more difficult by educating communities to know what trafficking is and how to identify it, how to protect themselves and others from trafficking and how to respond to trafficking.

Globally, Stop the Traffik runs campaigns to push decision makers to exert their influence to prevent trafficking, to build a worldwide movement by reaching out to new people and to gather information to develop up to date systems to rival the traffickers’ network.

Stop the Traffik’s success at building a movement seems largely due to its inclusive approach. The organization offers everyday people the chance to become activists by learning about the issues of trafficking and pledging time and effort to the cause. The website offers tips on how to raise funds for the organization and showcases many current campaigns that people can participate in.

Visit Stop the Traffik to donate or find out how to join the fight against human trafficking.