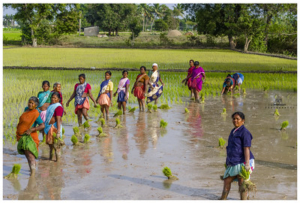 The Science-Based Targets initiative is a coalition of 885 companies to date that have set goals to reduce their greenhouse gas emissions. The overarching goal of the initiative is to meet the 2015 Paris Agreement’s established standard of limiting temperature rise to a maximum of 1.5 degrees Celsius above pre-industrial levels. The initiative lays out guidelines and strategies for companies to reduce their greenhouse gas emissions. Companies can accomplish this while producing transparent reports on their current emission levels. The purpose of this is to increase the companies’ credibility and public reputation. A team of experts reviews and approves each company’s proposed strategy to ensure that the strategy is effective and efficient. The initiative is led by a group of NGOs who work to reduce emissions: the CPD, the UN Global Compact, the World Resources Institute and the World Wildlife Fund. Some notable American companies taking part in the initiative include Walmart, Unilever and Coca-Cola. However, companies from countries across the globe are taking part.

How Will the Science-Based Targets Initiative Mitigate Greenhouse Gas Emissions?

How Does Mitigating Greenhouse Gas Emissions Help the World’s Poor?

Natural disasters, such as flooding and drought, disproportionately affect the world’s poor. Millions living in poverty are farmers, and weather changes easily affect agriculture. The livelihood of these farmers depends on predictable weather patterns, so natural disasters could be devastating to them. They could also devastate the world’s food supply. If farmers are unable to produce crops at the same rates due to changing weather patterns, food prices could rise. As a result, this could leave the world’s poor at risk of not being able to afford sufficient food.

Climate gentrification has disproportionate impacts on the world’s poor. Climate gentrification is the notion that the wealthy have the means to escape natural disasters, whereas the poor do not. Rising sea levels and increased temperatures may cause many to have to relocate. However, the poor may not have the resources to relocate. This puts them in grave danger and exposes them to the devastation caused by natural disasters.

By reducing carbon emissions in the private sector, the Science-Based Targets initiative hopes to limit the global temperature increase to 1.5 degrees Celsius. These actions could save millions who could be subject to natural disasters. Reducing carbon emissions slows the greenhouse effect, preventing the global temperature from reaching unlivable levels. Mitigating greenhouse gas emissions could prevent the millions already in poverty from being subject to natural disasters. The Science-Based Targets initiative is quickly gaining traction worldwide. One would hope that the private sector continues to do its part to reduce global carbon emissions.