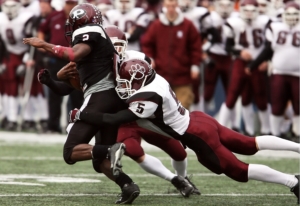 Osi Umenyiora is a former NFL player of Nigerian descent and a two-time Super Bowl champion. Now retired from the field, Umenyiora seeks to use his influence to uplift African youth by providing them with the opportunity to receive formal NFL training. Umenyiora began actualizing his vision in 2020. With support and funding from the NFL, he co-founded The Uprise, a talent-scouting and training program, with the Nigerian former NBA player Ejike Ugboaja.

NFL Africa and The Uprise

Umenyiora first conceived of an NFL talent-finding program targeted toward African youth upon noticing a sizable increase in the amount of NFL African players during the past decade. The trend reminded him of Ugboaja’s initiative in 2014; the basketball star had approached Umenyiora for help with sponsoring young Nigerian basketball players.

At the same time, Umenyiora noted that many African youths have the physical traits essential for success as a football player, which would give them a natural advantage over other hopefuls while making a career out of football. Furthermore, competition is comparatively more fierce in basketball and soccer, seeing as the two sports are popular worldwide. American football would provide the scouted youth with more opportunities with regard to potential to sign onto professional leagues.

In this way, Umenyiora solidified his idea for The Uprise. Due to his position as an NFL ambassador at that time, he easily secured support from the league and founded The Uprise camp.

The Uprise has already helped three African athletes get signed to NFL rosters, after holding training camps in multiple African countries and selectively sending promising players to Arizona for more training. Kehinde Oginni Hassan, Haggai Chisom Ndubuisi and Chigbo Roy Mbaeteka, who have never before played organized football, impressed the general managers enough to receive contracts and the opportunity to travel to the International Combine in London. Beyond this quantifiable impact, The Uprise has also served as a beacon of hope for many African youths by providing them with a viable and accessible pathway out of poverty, which is extremely valuable, given the 70% poverty rate among youth in sub-Saharan Africa in 2016.

More than securing NFL contracts for players, Umenyiora envisions sending the athletes to high schools and colleges in the United States and the United Kingdom. The former football champion is already working toward this end. For the upcoming NFL camp in Ghana, Umenyiora has organized for both NFL coaches and colleges to be on-site. In addition, he is also planning high-level camps, which sports companies will host, in Kenya, Senegal, Cameroon, Uganda and Nigeria.

Umenyiora hopes for a future where at least 15% to 20% of NFL players are from Africa. He also seeks to increase interest in football in Africa to deepen the continent’s connection with the NFL and foster a sense of communal pride for players of African descent who have already found success in their football careers.

As unemployment continues to pose challenges for African youth, Umenyiora’s initiative is a crucial intervention to provide an accessible and sustainable method of lifting oneself out of poverty. The Uprise is seeing tremendous success so far and its impact is projected to increase with the abundance of companies and colleges now recognizing the wealth of football talent waiting to be discovered in Africa.