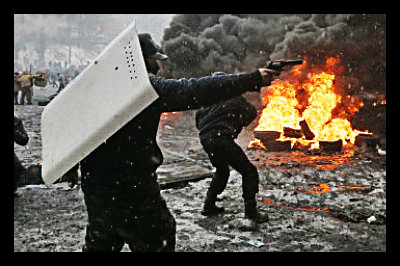 Since November, Ukraine has been rocked by intense public protests over the government’s apparent rejection of the West in favor of closer ties to neighboring Russia. The protests have taken a violent turn as many demonstrators clashed with riot police over new anti-protest legislation that was recently passed this week.

The new legislation aims to quell the public’s right to protest against government officials. The specifics of the law ban the placement of tents, stages and loud speakers in public spaces.

The law also puts in place hefty jail sentences for those deemed to have played a part in “mass disorder.” Other points in the law state that wearing face masks or helmets is prohibited, threatening violators with long sentences.

Probably the law’s most egregious violation pertains to journalist’s ability to report on government officials. Any criticism of officials by the media is deemed illegal under the new legislation.

Tensions boiled over on Sunday as protesters resorted to violence against police forces. Demonstrators beat officers with sticks and attempted to turn over a bus blocking access to parliament. Fireworks and smoke bombs hurled through the air, injuring many.

A total of thirty police officers were injured during the protests. Later that night, police fired upon protesters with large water cannons in an attempt to disperse them.

A central figure in the middle of the public outrage over recent anti-western moves by the government is former professional boxer Vitaly Klitschko. He has made repeated calls for protests to remain peaceful despite the government overreach.

Recently, Klitschko was joined by his fiancé, American actress Hayden Panettiere, in a show of solidarity with the protesters.

Despite his efforts, Klistchko’s repeated calls for restraint fell on deaf ears, as tensions proved too much for many involved in the protests.

The country’s recent pivot away from a proposed joint economic partnership with the European Union toward Russia leads many to see Russia’s influence in the new anti-protest legislation. Heather McGill of Amnesty International reports the new law is almost an exact copy of existing Russian legislation that dealt a severe blow to the civil society in Russia.

The new economic partnership with Russia aims to reverse the decline of trade among the respective nations. Under the new deal, Russia will buy up $15 billion of Ukraine debt and cut natural gas prices.

The proposed partnership will reach across many economic sectors including industry, agriculture, defense, construction and transport.

This new partnership has created a split among the citizenry throughout Ukraine. The eastern section of the country desires increased relations with Russia, while the West favors closer ties with the E.U.

As Ukraine moves closer to Russia, many fear the nation will emulate the authoritarian tactics associated with the Russian government. The brazen passage of anti-protest legislation with complete disregard for the public’s disapproval is a clear sign Ukraine is moving in that direction.