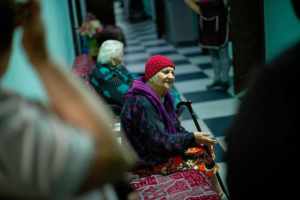 Amid the destruction that Russian troops have wreaked on Ukraine lies a forgotten demographic that has been forced to bear the brunt of Russian aggression: the elderly. As Russia continues to target healthcare facilities, apartment complexes and power plants, access to food, shelter and electricity is now elusive. Poverty among the elderly is more pernicious than it has ever been. Today, senior citizens represent one-third of all Ukrainians in need of dire assistance: 91% of elderly Ukrainians require aid to get food and are suffering from extreme cold while 75% need basic hygiene items and 34% need urgent medication for chronic illness.

A Legacy of Poverty

Elderly poverty in Ukraine is not a novel issue. Although Ukrainian citizens aged 65 and over represent 17% of the nation’s population, their plight has been largely overlooked. The collapse of the Soviet Union left in its wake a pension system that hinged on contributions from the steadily declining working class, which condemns 80% of pensioners to live below the poverty line as Ukraine’s population dropped every year.

The inaccessibility of essential services, pharmacies, hospitals and grocery stores as a direct result of the war has only exacerbated the struggle of the elders who have already been denied access to these basic necessities. Disabilities and chronic illness obstruct them from evacuating to safety, and for many the fear of burdening their families has compelled them to remain in a war zone with little to no companionship or support network as their loved ones flee the country.

Global initiatives are rising to the challenge. HelpAge International is a network of organizations that advocate for senior citizens around the world. The network has continued to support elderly Ukrainians in eastern Ukraine since the dawn of the war in Donbas in 2014, supplying almost 5,000 older community members with peer-to-peer support, assistive devices, hygiene kids and home-based care.

In partnership with People in Need, CARE is a global organization with a commitment to “fight global poverty and world hunger by working alongside women and girls”. The partnership resulted in the founding of the Ukraine Crisis Fund which aims to provide at least four million vulnerable civilians affected by the Russo-Ukrainian War with emergency assistance. This includes food, water and hygiene supplies, as well as cash support and psychosocial aid. The U.N. Refugee Agency (UNHCR) is helping elders recover shelter by helping to mend homes shelled by Russian airstrikes. Finally, the Armed Forces of Ukraine are working tirelessly to protect elderly citizens and all of Ukraine’s people. Their official fundraising account proves an effective way to improve Ukraine’s defense capability even from overseas.

Although war continues to rage, not all hope is lost. According to information services company Candid, which tracks funding data in real time, more than $1.3 billion has been donated to Ukraine through non-profits. Though it will take years for life to return to normal and even more years for elderly poverty in Ukraine to be remedied, the aid of the international community demonstrates that such change is indeed possible.

While recent airstrikes in Dnipro and Mykolaiv suggest that the humanitarian crisis in Ukraine is far from over, new defense systems supplied by Canada, the United States and the United Kingdom have already boosted Ukraine’s ability to disrupt Russian missiles. Thanks to the new developments, the elderly can be better taken care of as their homeland becomes better fortified. Though poverty among the elderly continues to plague Ukraine, recent improvements to Ukraine’s national security as well as the work of NGOs and nonprofits make a future where this issue is no longer a death sentence.