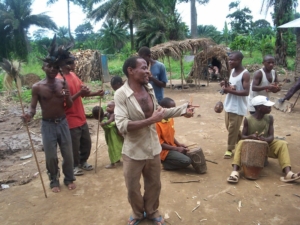 Being among the poorest populations in one of the poorest nations, Uganda, the Batwa people face extreme poverty in their everyday life. Once known to live in the depths of the African forests as one of the oldest indigenous tribes in the continent, they now reside in town slums. Many have come to wonder how a population that thrived for centuries started resorting to scavenging garbage cans for their next meal.

The Forest: A True Loss For The Batwa

In 1991, the Ugandan government “reclassified lands of the Batwa” to national parks. This move forced many Batwa people to relocate from their homes, sometimes by gunpoint. A 2008 report indicated that 45% of the Batwa people were landless and lived in poverty.

The Batwa people went from a community that once thrived in hunting and gathering to now struggling to find means of survival. The report also highlighted that many Batwa people are seeking work from foreign people under “bonded labor agreements,” resulting in them experiencing discrimination from “their ethnic neighbors.”

As aforementioned, some Batwa work for foreign people who are not part of their tribe. Others make a living from performing for tourists who visit the country. Unfortunately, due to the COVID-19 pandemic, there has been limited travel of tourists which means that many Batwa people lost their income, resulting in poverty. Due to these circumstances, many Batwa have resorted to “eating from garbage bins” to stay alive.

With the massive displacement that took the place of the Batwa, their community is shrinking more and more as time goes by. With little to no resources to stay alive, extinction is knocking on their door. Furthermore, tourism is a key component to the Batwa people’s survival.

To keep the community going, Uganda is encouraging local tourism where the Batwa people are now giving tours of the Ugandan national parks, a place they once called home. With a keen knowledge of this territory, the Batwa people are the perfect tour guides for the forests.

Additionally, Uganda contains an impressive gorilla population that many people travel to see in person. Having shared the forest with them for centuries, the Batwa tour guides introduce visitors to this impressive species with respect and caution. Such tours, which now target even local tourists, offer a memorable experience that is a “culturally sensitive” visit whose proceeds go to people who truly need them.

It is incredibly important to bring awareness to the Batwa tribe who live in extreme poverty and could disappear after centuries in the forest. With the modernization of their territory, this community has suffered a great loss of their home and livelihood and now faces extreme poverty and famine.

By supporting their efforts to survive through tourism and lobbying the Ugandan government to aid displaced peoples, this community could find hope again.