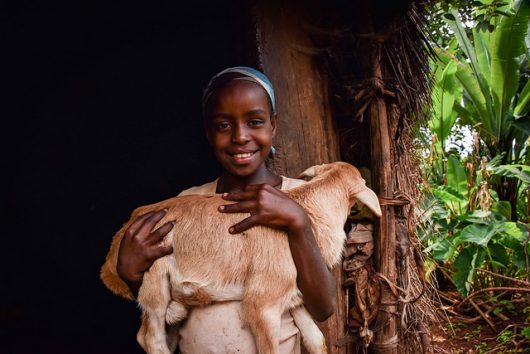 When women are given education, financial independence and power in government, great things happen. Unfortunately, many parts of the world are still relatively oppressive, making it harder for women to access these opportunities.

USAID is doing something to change that. As a part of its Resiliency through Wealth, Agriculture, and Nutrition program (RWANU), it launched the Ugandan Goat Initiative , which introduced a goat breed called the Galla, also known as “milk queen,” from Kenya in the hopes of empowering women.

As part of the initiative, women in Karamoja, Uganda are given goats and attend a training course on how to raise and care for them. The goats began to thrive under the women’s care, and little by little the strict gender roles in Karamoja have begun to unravel.

A survey of the community revealed that 65 percent now recognize the livestock group members as leaders in the community, and 61 percent have also reported improved marriages because of the goats.

“Now, I have something that I can call my own,” Joyce Owalinga, the chairwoman of her livestock group, noted. “As chairperson of my group, I can also now speak with confidence. The other women and community members respect and listen to me, and my husband now respects me.”

Not only is the Ugandan Goat Initiative changing attitudes and beliefs, it is also reducing hunger in the village. Many women are responsible for feeding their families but have lacked the purchasing power. Now, the goats bring milk which can feed families and be sold at the market for other needed goods. Each goat can feed roughly 68 people. RWANU also has programs for sustainable water management and forest restoration, aimed at improving access to food and reducing malnutrition in pregnant and lactating women and children under five.

These goats take communities one step closer to empowered women and gender equity. That news is nothing but good.