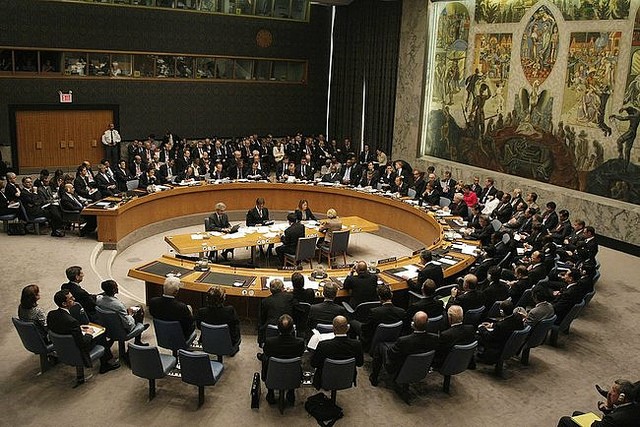 Sanctions. A frequently employed strategy to mollify human rights abuses has been marked, at best, as underwhelmingly ineffective.

In 1948, the U.N. General Assembly outlined a Universal Declaration of Human Rights, which “sets out basic rights and freedoms to which all women and men are entitled – among them the right to life, liberty, and nationality; to freedom of thought, conscience and religion, the right to work and to be educated; the right to food and housing; and the right to take part in the government.”

Unfortunately, the UDHR has been ineffective at upholding member-states to their obligations. Violent and nonviolent human rights abuses are common practice for unscrupulous governments.

According to information gathered by Amnesty International, out of the 160 countries in which data was collected, 119 countries arbitrarily restricted freedom of expression. During 2014, at least 18 countries committed war crimes or other violations of the “laws of war.”

In an effort to avoid draconian measures when correcting the irresponsible behavior of international actors, the global community has developed a pattern of implementing sanctions – the process suppressing or excluding economies from reaping the benefits of the global trade system.

Recently, however, the efficacy of sanctions has been questioned. Reports by the International Association for Political Science Students noted that sanctions disproportionately provide adverse consequences for the innocent population, but not the guilty leadership.

The now dismembered U.N. Sub-Commission on the Promotion and Protection of Human Rights issued a resolution in August 1997 where it condemned the use of sanctions as a tool of international diplomacy – further increasing skepticism on the efficacy.

Consequently, both selective and comprehensive sanctions discourage the promotion of human rights, and in fact, create counter-productive consequences – e.g. less distribution of wealth and the advent of black market business practices.

A recent example that undermines the efficacy of sanctions is the U.S. led sanctions on North Korea, which concentrated the remaining resources and wealth in Pyongyang (with the government). As a result, famished North Koreans resorted to cannibalism as an attempt to garner the necessary nutrients to survive.

Other long-standing recipients of U.S. sanctions are Iran and Cuba, which were marked as a pariah for their involvement in the sponsorship of terrorism and spread of communism, respectively. Fortunately, the U.S. has begun to normalize relations with Cuba and is likely to undergo a “fresh-start” without U.S. administered sanctions.