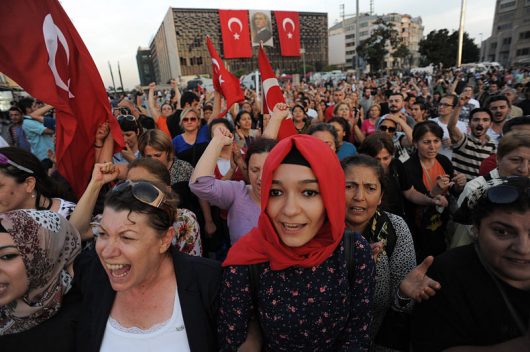 Turkey is a country with great geographical significance, connecting Eastern Europe and West Asia, and bordering several Middle Eastern countries that now stand at the center of conflict in the region, including Syria, Iran and Iraq. Therefore, it is important for Americans to understand how the U.S. benefits from foreign aid to Turkey and to weigh the relative benefits they derive from providing foreign aid to the nation.

Turkey is a nation with a long history of political disorder. Recent years have been no different, with the country seeing the expansion of federal power and the decline of democracy stemming from a controversial governmental reform in 2017, along with suffering the fallout of a brutal civil war that broke out in neighboring Syria. These events have caused many Americans to question why their nation is planning to spend $3.8 million in foreign aid for Turkey in 2018. While many believe that such aid is primarily for humanitarian aims, in fact, this financial assistance to Turkey is actually a key part of the military strategy that affects United States policy in Europe, the Middle East and Asia.

According to the U.S. State Department, nearly all of the foreign aid designated for Turkey is for military use. These resources have been helpful in allowing Turkey to bolster American aims in the Middle East, as the nation shares a border with both Iraq and Iran, countries that are of great significance to the United States. Iraq, a major economic interest due to its high supply of oil, is an unstable region in which the United States remains militarily involved following the Iraq War. Iran, a country with longstanding tensions with the United States, recently entered into a controversial nuclear deal with America in an attempt to manage Iranian development of nuclear technology. Providing aid to Turkey helps the United States ensure it has some influence over Turkish foreign policy, which Americans, of course, hope aligns with the best interest of the United States.

Another one of the direct U.S. benefits from foreign aid to Turkey is related to the NATO alliance. Turkey is a key member of the North Atlantic Treaty Organization, the vital military alliance between the United States and most European countries that has been key to checking Russian aggression in Europe for decades. Turkey has a vested interest in working with the organization, as its location next to Syria, a perilous region with heavy Russian involvement, puts it at odds with President Putin’s regime, making it important that the United States remains directly involved in Turkish affairs.

The most significant recent use of American foreign aid has been helping Turkey deal with the Syrian refugee crisis. As a result of the devastating Syrian Civil War, Turkey has been among the countries dealing directly with the humanitarian crisis caused by a massive influx of refugees. American foreign aid has been vital in helping to manage this crisis, allowing Turkey to organize a response to the growing number of refugees and preventing further destabilization in the country that might open a door to exploitation by extremist terrorist groups or Russian influence. If extremists of any type were to gain control over the Turkish government and its resources, the implications for United States national security and foreign policy could be disastrous.

Overall, because Turkey sits in a key position between the Middle East, Europe and Asia, and because it is linked militarily to the NATO alliance, it will continue to be a strategically important focus of American foreign aid. Despite Turkey’s flaws, such as its fragile electoral system and troubling history of ignoring the freedom of its domestic press, it remains a highly useful ally of the United States and a means by which the longstanding political instabilities of the region can be managed. The current political climate in the area, along with the longstanding NATO alliance, means there are still many U.S. benefits from foreign aid to Turkey.