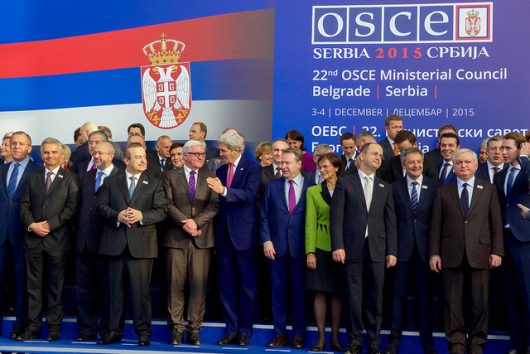 Serbia is working to strengthen human rights protections and to promote economic growth within the country while facing external pressure from Russia. Russia has been expanding its influence and amplifying ethnic tensions in several countries that may join the European Union. In particular consideration of the close relations between Serbia and Russia, the U.S. benefits from foreign aid to Serbia because this aid works to prevent a new Cold War in the Balkans.

From 2001 to 2017, the U.S. gave about $800 million in aid to Serbia to help the country stimulate economic growth, promote good governance and strengthen its justice system. One example of a major issue Serbia is dealing with is human trafficking.

According to the U.S. Department of State’s 2017 Trafficking in Persons report, Serbia remains listed as a Tier Two country because it has yet to fully comply with the minimum standard for eliminating the issue. However, Serbia has shown significant efforts to address human trafficking by establishing a permanent human smuggling and trafficking law enforcement task force, identifying more victims as well as providing guidelines to judges and prosecutors.

Other U.S. aid to Serbia in the past has gone toward strengthening its export and border controls. This includes efforts to prevent the spread of weapons of mass destruction. More recently, U.S. military aid has helped Serbia take part in NATO’s Partnership for Peace programs as well as prepare for international peacekeeping missions.

Economic Benefits of Aid to Serbia

From an economic standpoint, the U.S. benefits from foreign aid to Serbia through U.S. investors in the country. These investors include KKR, Philip Morris, Ball Packaging, Coca-Cola, PepsiCo, Cooper Tire and Van Drunen Farms. In 2013, Fiat began shipping cars manufactured in Serbia to the U.S., increasing imports from the Balkan countries.

In addition, U.S. technology companies in Serbia are becoming more interested in opportunities in areas such as e-government, cloud computing, digitization, IT security and systems integration. In 2013, Microsoft even signed a $34 million contract to provide software to government offices in Serbia.

Political Benefits of Aid to Serbia

U.S. aid to Serbia is currently focused on helping the country integrate into the European Union, which will decrease Serbia’s vulnerability to Russian aggression as well as strengthen its democratic institutions. Out of the $5.39 million the U.S. plans to allot in foreign aid to Serbia in 2019, 46 percent will be allocated to strengthening the country’s rule of law and protection of human rights, 34 percent will be put toward increasing the capacity of civil society organizations and 20 percent will be for good governance.

The U.S. benefits from foreign aid to Serbia from a diplomatic perspective as well in the case of international terrorism. The Ministry of Interior Directorate of Police, the Security Information Agency and Serbia’s law enforcement and security agencies have continued to work with the U.S. to prevent this major security threat, which affects both nations as well as the rest of the world.

In the past, Serbia has hosted a regional counterterrorism conference on foreign terrorist fighting. The country has also sent representatives to conferences in Albania, Italy and Slovenia to discuss how to counter violent extremism.

There are many economic and political reasons the U.S. and Serbia would benefit from the U.S. providing aid to Serbia. Together, the two countries have great potential to make technological advancements as well as work for a more peaceful world.