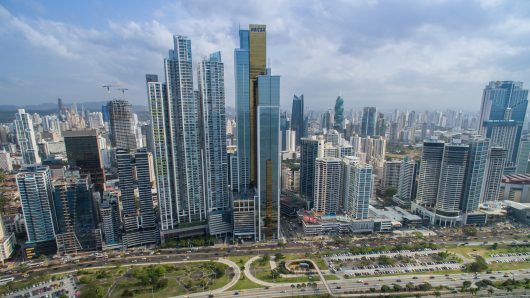 Panama is the dividing landmass between two major water sources, the Atlantic Ocean and the Pacific Ocean. A small sliver of a country, Panama is only 115 miles at its widest; such a small country should not by any means be an influencer in international affairs, but with the building of the Panama canal by the United States in 1914, Panama became perhaps the most prolific trading country in the world. As a result, the U.S. benefits from foreign aid to Panama in many ways, especially in access to trade and finances.

According a National Geographic article, nearly 14,000 ships pass through the canal a year. Due to the length of time it takes to move through the canal (approximately eight to ten hours), the canal is a difficult route to navigate, but is crucial to increasing the speed with which shipping companies transfer goods between companies. Panama and the U.S. have had a friendly relationship since the conception of the canal, and it has continued into trading deals.

The U.S. Department of State describes the ways the U.S. benefits from foreign aid to Panama incredibly simply: “Panama’s location and role in global trade makes its success vital to U.S. prosperity and national security.” However, it also notes that the Panama Canal is a hub for traffickers and illegal activity as well. Due to this, the U.S. greatly assists in Panama’s anti-corruption and anti-trafficking policy building and free-trade agreements in the area.

One main interest in Panama is building a strong police presence in the region, due to the amount of cargo coming and going through the canal’s system. The more the U.S. and Panama regulate the canal, the less opportunity traffickers have to transport illegal goods to other countries.

Similarly, the U.S. is incredibly invested in the trading and transportation policies around the canal, because not only is the U.S. one of the biggest investors in the canal, but it is also one of its main users. The Canal’s official website offers a graphic which shows all of the major import/export trade routed through the Panama Canal, and each route begins or ends in the U.S. So not only does Panama benefit from the finances and security the U.S. provides, but the U.S. benefits from foreign aid to Panama by ensuring access to a major trading route that greatly benefits the U.S.

The U.S. benefits from foreign aid to Panama through mutually assured success of U.S. involvement in trade routes and Panama’s maintenance of a secure canal system. As long as the U.S. continues to support anti-trafficking efforts in Panama and help the nation monetarily, it is almost impossible for the U.S. to lose this benefactory system.