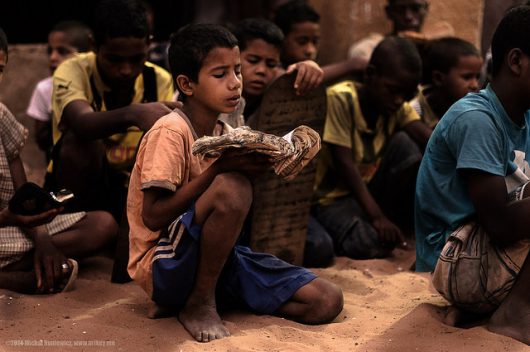 Nestled between Senegal, Mali, and Western Sahara, Mauritania is a mostly desert country. The population is roughly 4.3 million people, making Mauritania the fourth least densely populated country in Africa. Half the population lives at or around the coastal capital of Nouakchott. The country faces the challenge that only 0.5 percent of its land is measured as arable. It suffers an extremely hot and dry climate, leading to dust-laden wind and occasional droughts.

The History of U.S.-Mauritania Relations

The U.S. was the first country to recognize Mauritania’s independence when it became independent from France in 1960. The U.S. had excellent relations with Mauritania from 1960 to 1967 and aided the country with a small amount of economic assistance. In 1989, U.S.-Mauritanian relations were disturbed by the Mauritanian governments expulsion of Senegalese citizens. Ties were further deteriorated by Mauritania’s supposed support of the 1991 Gulf War.

At the end of the 1990s, the Mauritania government began to adopt new policies, which were higher regarded by the U.S. As a result, U.S.-Mauritanian relations grew significantly, and military cooperation and training programs soon followed.

The U.S. condemned Mauritania’s military coups in 2005 and 2008. However, the U.S. supported the nations transition to democracy after the coup d’état in 2005. Furthermore, the U.S. assisted in election-related business, such as voter education and election support in 2007.

Since 2009, funding has returned to Mauritania. The U.S. continues to support the Mauritania government and to encourage political leaders to continue democracy. The U.S. benefits from foreign aid to Mauritania because of key issues the nations fight for together: food security, counterterrorism, strengthening of human rights, and the promotion of trade. This is most evident through the growth of trade and counterterrorism movements.

Although it is slow, the U.S. benefits from foreign aid to Mauritania by growing trade and investment relations within this country. The two countries are linked through the U.S.-North Africa Partnership for Economic Opportunity (NAPEO), a regional public-private partnership that improves the network of businesspersons in the U.S. with the five Magherb countries, including Mauritania.

Mauritania is among five other nations (G5) that work with the Multinational Joint Task Force to end terrorism. They are an important member in creating African-led solutions to counter instability and terrorism. The G5, Mauritanian authorities, and the U.N. have worked closely together to implement solutions of counterterrorism. The representatives set out plans that aim to:

In October 2017, the U.S. government pledged up to $60 million toward the G5’s counterterrorism initiatives. The funding was to be used to train and equip members of the Joint Task Force. The goal of this funding is to entrust nations, like Mauritania, to provide their own safety.

Terrorist organizations are still active in this region and had launched a series of attacks through Mauritanian from 2005 to 2011. Foreign aid workers and tourists were targeted during this time. Although the threat of terrorism in Mauritania remains high, it is on its way toward improvement because of the counterterrorism actions being taken in 2017, made possible by foreign aid.