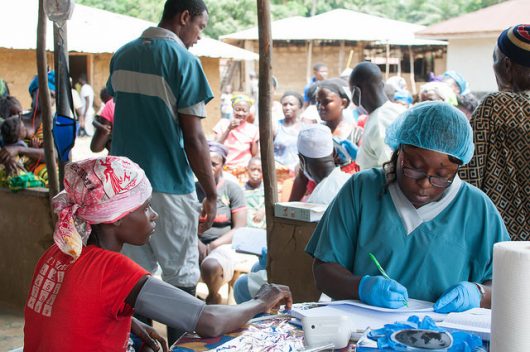 President Trump’s budget request for the fiscal year of 2018 includes drastic cuts — 32 percent — from foreign aid. The drop of 4.6 billion in humanitarian assistance and global health spending comes along with a call for “the world to pay their fair share” in terms of global healthcare funding.

While the U.S. did contribute nearly one-third of the global spending on Development Assistance for Health in 2016, foreign aid makes up less than 1 percent of the national budget; that same year it was only 0.22 percent.  Looking at countries’ spending as a percentage of gross national income, the U.S. ranks 23rd for foreign aid and healthcare funding.

What Would Cutting Aid Mean?

Cutting foreign aid would lead to:

The Brookings Institute forecasts that the domestic cut to foreign aid would drop healthcare funding from 39.2 to 28.8 billion, marking the lowest American investment in the last decade.

Since pathogens such as zika, influenza, and Ebola are prone to spread across borders, aid cuts threaten the health of U.S. citizens. The Ebola breakout killed over 11,000 people; an additional 21,000 died due to a reduction in access to healthcare services.

Investment in surveillance programs greatly reduces the risk of a pandemic and eliminates the spending that an outbreak necessitates. The entire Ebola outbreak cost a total of $3.6 billion — $2.3 billion of which came from the U.S.

Foreign investment also inspires a response from local governments and organizations. By prioritizing health, global support helps to foster expectations that governments should do the same. Funding for HIV/AIDS research, testing and education have resulted in every African country possessing a national AIDS strategy and commission. Between 2011 and 2015, African countries increased their own funding by 150 percent.

How Does Promoting Healthcare Help the World?

Supplying vaccinations promotes prevention and may lead to a complete eradication of deadly diseases. Every dollar invested in childhood immunizations begets $44 in economic benefits, which includes saving money that families lose when a child is sick and the parent is unable to work.

A healthy individual will become a more productive member of society at large than his/her sick or dead peer; health is a direct determinant for economic stability.

Bill and Melinda Gates sum up the importance of global healthcare funding in saying: “By preventing the spread of disease, we save lives in other countries and at home. By stimulating economic development, we open new markets for our country’s goods. By making conflict less likely, we advance our own national security. And by lifting up the poorest, we express the highest values of our nations.”

Global healthcare funding relates to each point, and thereby creates waves outside of the medical sector.