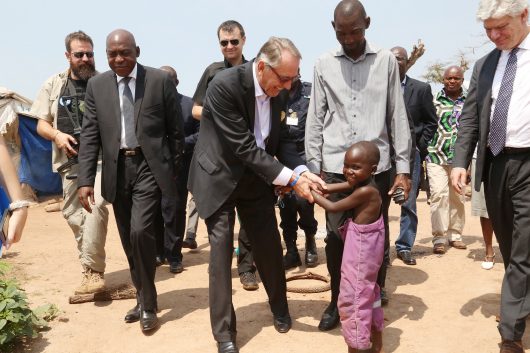 Relations with the United States and the Central African Republic (CAR) began in 1960 following the nation’s independence from France. While CAR is one of the least developed nations in the world, the United States has enjoyed strong relations with CAR since it began. The U.S. benefits from foreign aid to the Central African Republic by recognizing the steps the country has taken after decades of instability and weak governance.

The United States had suspended embassy operations three times over the past 20 years, most recently in December 2012 in the CAR due to violence and the overthrow of the CAR government. The embassy reopened in September 2014 and remains open today.

Due to the result of years of weak government and violence, the United Nations (U.N.) installed a multi-dimensional peacekeeping operation with over 10,000 peacekeepers in September 2014 to aid the transition process of a new constitution and election.

In December 2015, the country approved a new constitution and successfully held national elections for the President in February 2016 and for the National Assembly in April 2016. The U.S. benefits from foreign aid to the Central African Republic through a more stable country that enjoys greater security through improved economic growth and development.

While the CAR has a more a stable government, conflict has grown between armed groups across 2017 as have attacks against civilians, humanitarian workers and peacekeeping forces. The Assistant Secretary-General for Humanitarian Affairs and Deputy Relief Coordinator of the U.N., Ursula Mueller, has noted that 637,00 people received emergency food help and 1.4 million people received clean water assistance.

In addition to a now more stable government, the CAR does have some natural resources, with timber and diamonds dominating exports; however, transportation and electricity are extremely limited. The CAR is now the United States 187th largest goods trading partner with $37 million in total goods traded during 2015.

USAID decided to step up its aid to the people of the CAR as over 60 percent of the CAR lives in poverty, population displacement continues to increase as a result of ongoing violence, and the number of internally displaced persons increased by more than 70 percent since early 2017.

Both the U.N. and USAID’s partners coordinate to give emergency humanitarian help to affected populations. USAID’s Office of Food for Peace continues to support the U.N. World Food Program’s distribution of food to the most vulnerable people of the CAR — an estimated $14.9 million expenditure to the U.N. agency.

The U.S. has provided over $500 million of humanitarian, development and security assistance in support of the CAR people’s efforts to find long-term stability and peace. It remains to be seen how relations between the Central African Republic and the United States continue, but so far, the two nations are mutually beneficial.