Tag Archive for: U.S. Benefits From Foreign Aid to Vietnam 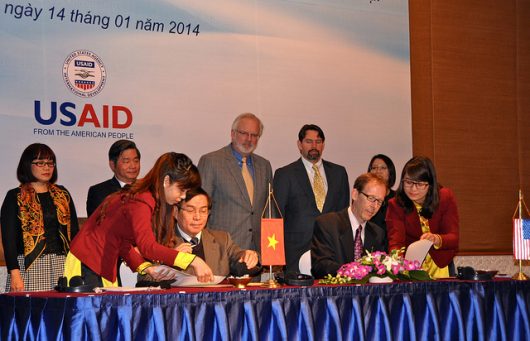 Vietnam stirs up mixed emotions in many Americans because of one of the U.S.’ most controversial conflicts. To many it will always be a war that touched their lives in a negative way – a lesson to be learned or a friend never to be forgotten. But as a government does not have the luxury of emotions and must secure the future for its citizens, the U.S. provides aid to Vietnam. The U.S. benefits from foreign aid to Vietnam in three ways:

Since 1989, through the U.S. Agency for International Development (USAID), the U.S. government has been sending humanitarian aid to Vietnam in the hope of developing an important strategic partner in an increasingly contentious part of the world.

In 1989, the U.S. and Vietnam began the process of healing. A conflict nearly two decades long cost the lives of millions of Vietnamese and thousands of Americans. As a gesture of goodwill, USAID began to send foreign aid to Vietnam through the Patrick Leahy War Victims Fund and the Displaced Orphans and Children’s Fund. The Communist government of Vietnam spent more than a decade healing the wounds of the divided country, and aid from the U.S. helped this process.

Over the next two decades, how the U.S. benefits from foreign aid to Vietnam can be seen. The U.S. and Vietnam began to normalize political relations. With this came increased aid and funding for USAID projects in Vietnam. USAID continues to support cleanup efforts from the U.S. military’s use of Agent Orange, while also allocating funding to health, municipal and education projects.

The Mutual Benefits of Trade

The U.S. benefits from foreign aid to Vietnam were seen through the mutual interests of trade. Within 16 years of the start of new U.S-Vietnam relations, an economic and technological cooperation deal was signed by both nations. President George W. Bush signed the deal in 2005. In 2013, President Barack Obama signed another cooperation deal, further strengthening economic and technological ties. Obama’s deal also included environmental, educational and medical cooperation.

In May of 2017, Prime Minister of Vietnam Nguyen Xuan Phuc announced that he would sign another trade deal with the U.S. This deal is reportedly worth up to $17 billion and will mainly focus on electronic technology. General Electric agreed to a $6 billion deal with the Vietnamese government. Vietnam increasing its imports from the U.S. is a good sign of cooperation and is another way the U.S. benefits from foreign aid to Vietnam.

Currently, the U.S and Vietnam have a trade deficit of more than $30 billion, which is the sixth largest deficit among U.S trade partners. The Trump administration campaigned on the promise of reducing trade deficits. Since his election, both the U.S. and Vietnamese governments have agreed to work on terms and deals that would reduce the deficit. The large deficit is caused by cheap apparel imported from Vietnam to the U.S. Over an eight-year period (2008-2016), the U.S. investment in Vietnam grew to almost $10 billion.

The Development of a Military Ally

In May 2016, President Obama lifted the ban on the sale of weapons to Vietnam. This was an important step economically and to increase military cooperation. Vietnam has shown interest in buying U.S multi-role fighter jets, specifically the F-16 A/B. The country has also shown interest in maritime reconnaissance aircraft and unmanned drones.

Under the Obama administration in 2014, the first joint training exercise was held between the U.S and Vietnamese militaries. The exercises focused on a joint military response to a humanitarian crisis caused by natural disasters. Afterward, both navies would begin to work more closely together, focusing on maritime defense and security. The development of a potential military ally is another way the U.S. benefits from foreign aid to Vietnam.

Also in 2014 was the introduction of monetary aid from the U.S. to Vietnam for its security and defense. More than $45 million was given through the State Department’s Foreign Military Financing and Law Enforcement building programs. Another $425 million was agreed to be paid over a period of five years through the Department of Defense’s Cooperative Threat Reduction Program and Maritime Security Initiative. The U.S. is also helping Vietnam build a peacekeeping training center in Hanoi to help Vietnam increase its ability to take part in peacekeeping missions for the U.N.

The U.S. benefits from foreign aid to Vietnam are manifold, and the bilateral relationship is on track to become a shining example of the transition from donor-recipient to a strong partnership. While millions of people spanning generations will have only painful associations with U.S.-Vietnam relations, the past two decades offer hope to new generations for a peaceful and prosperous future.