Tag Archive for: U.S. Benefits from Foreign Aid to China 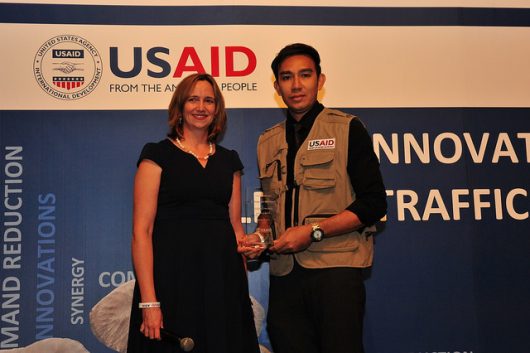 When U.S. citizens are asked to name the percentage of the federal budget they believe is spent on foreign aid and relief, the consensus sits at 31 percent. Only three percent of Americans correctly estimated the federal spending at less than one percent of the total federal budget. Even though its a fraction of the overall budget, the U.S. benefits from foreign aid to China.

The Beginning of U.S. Foreign Aid

Secretary of State George Marshall started the first U.S. foreign aid program shortly after World War II. After the war, many countries and cities in Europe were left devastated and needed assistance in rebuilding their infrastructures, charging their economies and stabilizing the affected nations.

Congress realized the stark importance of building an international community of nations where citizens’ security, liberties and right to economic prosperity are sustained by working together. President John F. Kennedy signed the Foreign Assistance Act into law in 1961, embodying the traditional American ideology of humanitarianism. The aim of foreign aid is to reduce:

Investing in another nation’s economy leads to the economic expansion of free markets and encourages global trade. Positively impacting foreign economies provides huge benefits for the American economy as the world moves quickly toward one global economy. Due to U.S. foreign aid to China, China has risen to the second largest economy in the world. This makes China a key contributor to growing and rebalancing the global economy after the financial crisis of 2008. China’s economic interests closely align with the West as it strives to grow its GDP and bring economic opportunity to its people.

In 2017, the U.S. spent $20.2 million on foreign aid to China. The third largest spending category for that foreign aid is in economic development at $2.98 million. The U.S. benefits from foreign aid to China are seen through improvements to private sector competition, contribution to free Chinese markets and the global trade economy. U.S. economic interests, markets and trade benefit from these investments in the Chinese markets.

As millions of Chinese citizens move out of poverty and into a growing middle class, companies see emerging markets in the untapped potential consumers of American goods. Boeing is an American aerospace company that has quickly become the largest in design and manufacturing for international commercial jetliners. In recent years, China’s Aviation Supplies Holding Co. has ordered 300 commercial aircrafts to be manufactured and delivered through 2020.

The economic expansion of free global markets not only improves the American economy, due to the interconnectedness of global markets, but it also works to ensure the growth of stable democracies. The U.S. benefits from foreign aid to China through the fostering of long-term relationships with developing nations. In the process, the U.S. creates loyal allies who directly benefit from the interests and social ideologies on individual liberties that lead to the formation of stable democracies.

The presence of stable democracies around the globe prevent dangerous vacuums that can be filled by extremists who do not share American interests and ideologies of individual freedom. In 2010, fifty U.S. generals met with Congress to express the need for increased spending in foreign aid to protect the lives of American troops.

In 2017, China spent more than $700,000 on preventing the development, spread and use of weapons of mass destruction. The relationship between the U.S. and China is necessary for effectively combatting global terrorism. In addition, China consistently sides with the U.S. on foreign issues related to North Korea and Iran. Continually, the U.S. benefits from foreign aid to China through U.S. soldiers overseas by working to reduce the threat of harm and to stabilize regions.

Increased growth, development and productivity shows how the U.S. benefits from foreign aid to China, as does the rest of the world. Financial aid works to strengthen international relations while reducing global threats of violence by preventing power vacuums where radical ideologies can take hold. Furthermore, financial aid to China facilitates the spread of American and Western ideologies and empowers the global economy by the growth and spread of free markets.