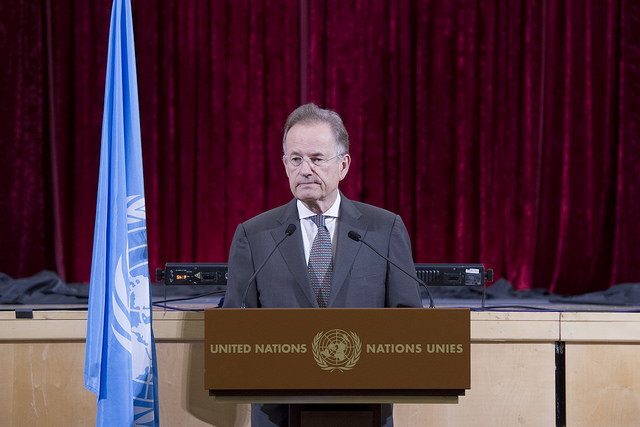 Each year, on Oct. 17, the world joins together in solidarity to promote an unwavering commitment to eradicating poverty.

This year marks the 25th anniversary of the resolution by the U.N. General Assembly, 47/196, that declared Oct. 17 the International Day for the Eradication of Poverty. Father Joseph Wresinski inspired the observance of this day through a Call to Action 30 years ago in 1987: “Wherever men and women are condemned to live in extreme poverty, human rights are violated. To come together to ensure that these rights be respected is our solemn duty.”

This was the first time in history that the need for a multifaceted response to poverty was recognized in full. Wresinski asserted that ending poverty is about more than aiming for adequate income or meeting basic needs but that it is also about being able to live a life in dignity and to enjoy basic human rights and freedoms.

The theme of this year’s International Day for the Eradication of Poverty, “Answering the Call of October 17 to end poverty: A path toward peaceful and inclusive societies,” mirrors Wresinski’s historic Call to Action.

In the decade from 2002 to 2012, the proportion of the global population living below the poverty line, with just $1.90 per person per day, dropped by half, from 26 to 13 percent. Individuals, groups and states came together on Oct. 17 to celebrate the success of various nations helping so many out of poverty.

In a statement made for the occasion, Donald Lee, President of the International Committee said, “However, we must not be complacent because the successful implementation of the United Nations’ ambitious agenda depends not only on our active participation but also on our constant vigilance to ensure that world leaders live up to their commitments to end poverty in all its forms and to build peaceful societies.” Poverty remains widespread and inequality exacerbates the problems facing impoverished nations. The world must do more than its current efforts in order to eradicate poverty completely by 2030; eradicating poverty also requires breaking the cycle of inequality.

International organizations including The United Nations, International Movement ATD Fourth World, Global Call to Action Against Poverty and Amnesty International joined together for celebrations on the International Day for the Eradication of Poverty. Over 500 events were documented all around the world to commemorate the day, including in the Philippines, India, Ireland, Nigeria, Macedonia, Hungary, Belgium, Poland, France, United States, United Kingdom, Australia, Netherlands, Bulgaria, Tanzania, Taiwan, Canada, Italy, Mauritius, Burkina Faso, Morocco, Cameroon and the list goes on.

World leaders everywhere used their voice to remind the public of the importance of Oct. 17:

These actions are just some of the few out of many. The awareness that Oct. 17 brings to the constant fight against global poverty is vital. From the support and voices of common individuals, non-governmental organizations, international organizations, senators, governors, prime ministers and presidents, the advocacy efforts initiated by the International Day for the Eradication of Poverty bring our world another step closer to righting the long-preventable wrong of poverty and its suppression of basic human rights.