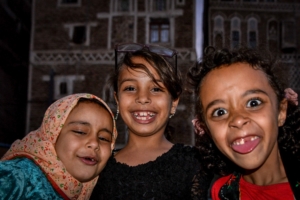 Filmmakers David Wilson and Bill Leeson founded War Child after they witnessed the horrors of the Bosnian war and saw the apathy that political leaders back home in the United Kingdom had towards it. Some of the organization’s highlights include providing support to 123,182 children and families around the world and helping some 26,274 undocumented children receive recognition. War Child UK has grown since its founding and now has sister organizations in various countries such as Holland, Canada, the U.S., Australia and Sweden. These help War Child support and protect even more children. War Child UK helps children affected by war in various ways which include providing education, protection and advocacy, and helping improve youth livelihoods. These are a few highlights of the organization’s work:

Child Helplines in the DRC

Life in eastern DRC, where armed groups are still active, is still dangerous, even though the war in the Democratic Republic of the Congo (DRC) ended officially in 2003. Children bear the brunt of the conflict in this country. The U.N. reports that children were victims of more than 11,500 violations between 2014 and 2017. War Child UK runs a free helpline called Tukinge Watoto (meaning “Let’s Protect Children”) to help provide support to at-risk children and make sure that law enforcers respect their rights. Using the helpline, children can speak directly to social workers and trained counselors. The helpline then refers them to local child protection organizations, but those in emergency or high-risk situations go into protective care. So far, 4,860 children in DRC have received protection information through the helpline.

War has been going on in Yemen for more than four years now. The U.N. estimates that more than 80 percent of the population needs some form of humanitarian aid, with 7.4 million of this number being children. It has also been reported that more than 2 million children are malnourished. War Child UK helps children by offering both food and cash assistance in Yemen. The first food assistance program started in 2017. Rather than directly distributing food items, the organization provides food vouchers that help families buy food that can last for around a month. War Child U.K. began distributing unconditional monthly cash assistance to vulnerable families in the governorate of Sana’a because they felt it gave families the independence to choose how they spend their money, be it on food, clothing or medicine. Currently, the organization is working in the governorates of Sana’a, Ibb and Taiz.

Northern Uganda has received a huge influx of some 200,000 refugees from South Sudan in the past few years. War Child works with KATI, a social enterprise, to provide youth in the region with business training and access to start-up loans. War Child initially set up KATI, but it is now an independent organization. The partnership between the two organizations has had plenty of success as 1,500 youth have benefitted since its beginning. In 2017 alone, KATI helped launched 146 business ideas in Northern Uganda. War Child notes that it is important to help the youth find jobs or start businesses to prevent social tension and further instability. It also helps youth transition successfully into adulthood.

War Child UK helps children by providing them with a voice and support, especially those who grow up in environments of conflict and war. It is important that an organization exists like it exists to cater to the needs of these young people who the future of their respective nations.