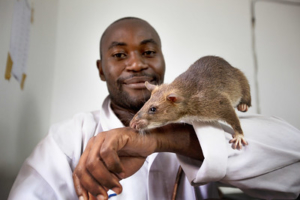 As tuberculosis (TB) kills more than a million people each year, a new strategy to detect the disease has emerged: using rats to identify TB positive samples. TB remains the world’s deadliest disease, infecting 10 million and killing 1.5 million people in 2018. Tuberculosis in sub-Saharan Africa is also the main cause of death for people living with HIV.

In Mozambique, where 13.2% of the population has HIV, more than half of the people with TB also have HIV. Along with malnutrition and other diseases, HIV reduces resistance to TB, so people living in poverty are especially susceptible to TB. Those experiencing poverty are also more likely to have fewer healthcare options and spend most of their lives in overcrowded conditions and poorly ventilated buildings where TB can easily spread. However, TB is treatable; it just needs to be caught in time. APOPO, a Belgian NGO, works to detect tuberculosis in sub-Saharan Africa by training rats to sniff it out.

How Can Rats Detect Tuberculosis?

For nine months, African giant pouched rats are trained to sniff out TB from samples of sputum — the mucus produced from coughs. Much like the Pavlov’s dog theory, trainers condition rats to associate the sound of a click with a reward; the rats only hear a click and receive a reward when they interact with TB positive samples. The rats have to hold their snouts over the sample for two to three seconds to indicate the positive sample. To “graduate” and become heroRATS — the official name for APOPOs rats — the rats go through a testing process where they have to detect every TB positive sample among rows of sputum.

Since 2007, APOPO has partnered with local clinics that send potential TB samples for the rats to check. Health clinics perform smear microscopy tests that often come up negative when they are actually positive. The heroRATS help to correct this problem by accurately identifying the TB positive samples. Their detection rats can check up to 100 TB samples in 20 minutes while the same task might take a lab technician up to four days. After the APOPO lab confirms the TB samples tested by the rats (using WHO methods), they alert the clinic about the results. So far, the rats have screened 580,534 TB samples and prevented 126,375 potential TB infections, raising TB detection rates of partner clinics by 40%.

The Relationship Between TB and Poverty

When medical professionals are unable to detect tuberculosis and treat it in time, the disease can augment poverty rates, making living conditions even worse for people who have it. Because TB is highly contagious, those with the disease are not allowed to go to work or school, leading to a loss of income and education. The stigma surrounding TB is also detrimental; people are often excluded from the community, so they can no longer rely on support from previous outlets. APOPO’s work to increase the TB test’s accuracy and speed helps those infected to know their correct results and then seek more immediate treatment.

Armed with its innovative thinking — and its heroRATS — APOPO is making progress in detecting tuberculosis in sub-Saharan Africa and limiting its spread.