Representatives from Israel, Germany and Kenya signed a treaty that will initiate the second phase of the plan to protect Lake Victoria.

The Lake Victoria treaty was signed on July 11 in Nairobi.

Phase I involved promoting tilapia fish farming in an effort to support the community’s economy and livelihood. Phase I also included implementing a better system to manage the water waste in the Lake so the tilapia could more readily thrive.

Phase II will involve extending the project and funding and cooperation from the three countries that signed the treaty. Through this second phase, the treaty aims to ensure that the three countries will work to “enhance sustainable ways of protecting Lake Victoria’s environment but creating alternative livelihoods for the communities living around the lake.”

Plans to create lasting means of support involve building more ponds in Kenya to expand the areas in which tilapia can be raised and later used for food.

Forced labor around the world has generated $150 billion. Now, the United Nations has backed a treaty that will punish countries and companies who commit acts of forced labor.

Forced labor can be defined in many ways, with two-thirds of the profits mentioned coming from sexual exploitation. The rest comes from domestic and agricultural workers, which makes up domestic exploitation. Forced labor includes slavery as well as suspicious recruitment tactics.

The International Labor Organization recently documented 21 million involuntary laborers, citing this as a massive breach of human rights. The U.N. saw it fit to support this view and at a conference in Geneva, many countries showed support as well.

ILO Director Guy Ryder acknowledged the huge feat ahead, citing education as one of the early steps to changing the current economic standings that forced labor flourishes in. In an interview with CBS News, Ryder says, “We need to strengthen social protection floors to prevent households from sliding into the poverty that pushes people into forced labor.”

The international victims of forced labor are 55 percent women and girls who are sexually exploited and serve as domestic laborers. Men and boys are often forced into mining and other agricultural positions. Their lack of education and impoverished upbringing create the perfect recipe for being tricked into forced labor.

Many companies trick their workers by having them sign a contract in one country and then relocating them and stripping them of their passports. By doing so, the workers are trapped in a different country with little means to escape. The inhumane behavior shown by employers across the world has come to the attention of the national stage and many countries refuse to allow its continuation.

In the Middle East, where many U.N. representatives refrained from the treaty, around 600,000 laborers are known to be forced in accordance to the ILO reports. Even with the snub of these countries and Thailand, the pact took the majority, and many countries plan to see changes in the near future for the way forced labor is handled.

Many of the countries that signed have vowed protection to victims of forced labor who were forced into criminal activities, acting as a barrier between those who have abused and the people that will face severe consequences. 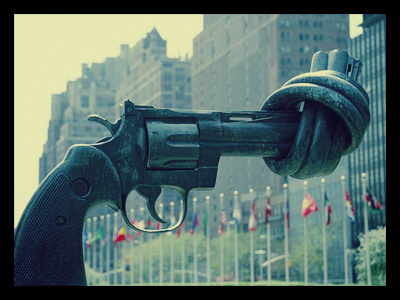 The United Nations is attempting to establish tighter rules for regulating the international gun trade. UNDP Administrator Helen Clark explained that these weapons “fuel conflict, violence and high levels of crime in dozens of countries,” as she argued in favor of a treaty that covers all forms of international gun transfers. After a failed round of talks in 2012, this week has seen a fresh attempt in New York City to crack down on the spread of violence worldwide.

Historically, arms control treaties have been far more successful in restricting weapons of mass destruction than small arms. The Nuclear Non-Proliferation treaty has been largely successful since its inception, and the UN wants desperately to reduce the number of deaths from armed violence worldwide, which totaled over 500,000 in 2011—largely due to easy access to firearms.

The biggest obstacle to such a treaty would likely be opposition from the United States. In 2008, the Supreme Court ruled that the Second Amendment explicitly protects an American’s right to own a handgun, in the case District of Columbia v. Heller. The proposed Arms Trade Treaty would require all countries to adhere to a universal standard on regulating the sale of firearms, and while such a change is not guaranteed to force significant modifications upon US policy, the cessation of autonomy on such a divisive issue has already created a fire in the belly of American gun advocates.