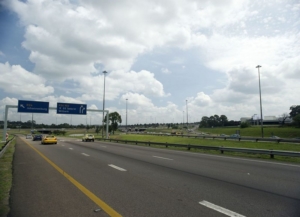 The future is brighter for Africans looking to buy a new car as the automobile industry is rapidly growing. Many nations across the continent are investing in better infrastructure because of this African auto boom. They are also building roads to support rapid economic and population growth. African automobile companies such as Kantanka, Kiira and Innoson have recently entered the marketplace. They provide jobs that help alleviate poverty across the continent.

African nations are rapidly growing and building the necessary infrastructure to accommodate the change. Numerous North African nations combined efforts and are currently constructing a trans-African highway system. This highway system will connect people across the northern region of the continent. The Trans-Maghreb highway will connect 55 towns and 22 international airports in addition to numerous ports and other industrial areas. Growing businesses require room to expand and will significantly benefit from the increasingly connected continent due to access to more trading partners.

In addition to economic benefits, the African auto boom empowers individuals to migrate and travel to other regions easily. Currently, 416 million Africans live in extreme poverty, and many are stuck in impoverished areas that are difficult to escape physically. Access to automobiles allows people to leave poorer areas for better opportunities in different regions. There is a strong correlation between the lack of access to cars and poverty. Professor of urban planning David King states, “There are a lot of people who keep struggling because they can’t afford to get around reliably.” Some jobs require someone to travel an unwalkable distance; those without access to a car cannot work specific jobs. The expanded highway system, coupled with the growth of regional automobile manufacturers, promotes more economic opportunities and individual autonomy.

Major automobile companies such as Ford, Volkswagen and Nissan operate manufacturing plants across numerous African countries and provide high-skilled jobs for local economies. Nations such as Nigeria and Kenya offer automobile companies tax incentives to expand their business and provide employment to reduce the unemployment rate. Many companies view Africa as a continent that has great potential and predicts the rapid growth of sales as more countries industrialize and modernize their economies. Although major companies face stiff competition from used car sales, more people have access to automobiles and high-skill jobs.

In addition to the manufacture and sale of foreign cars, African owned automobile companies developed domestically produced alternatives that compete with international brands. Ugandan-based Kiira Motors Corporation company produces both hybrid and electric vehicles ranging from sedans to solar-powered busses. It also provides numerous jobs to local Ugandans and boosts the country’s industrial productivity. Other companies such as Kantanka Automobile company and the Innoson Vehicle Manufacturing company are participating in the African auto boom. They produce automobiles that compete with foreign car companies and grow local businesses. The cars are manufactured, designed and sold in Africa. Domestic production chiefly benefits local people that need both jobs and cars to escape poverty.

Despite the automobile industry’s early success in Africa, there is still great potential for growth and eventual prosperity. Volkswagen predicts sales will reach three to four million new cars a year and other companies continue to expand across the continent. Domestic African automobile companies are rising and competing with big-name companies. The African auto boom will continue to provide stable jobs, grow the economy and increase the autonomy of impoverished populations across the continent.