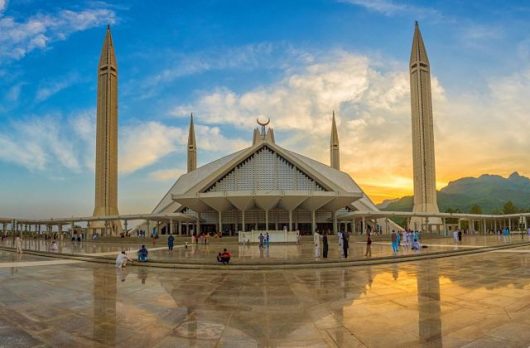 In recent years, Pakistan has witnessed a surge in the number of tourists from around the world. This positive change is not only welcomed by the government agencies but also the private businesses and the local people. According to a CNN report in 2017, Pakistan saw in increase of around 200,000 more tourists this year than the year before, about 1.7 million foreigners. Moreover, the annual tourist arrival has tripled since 2013, as reported by The Pakistan Tourism Development Corp (PTDC).

The restoration of tourism in Pakistan will not only benefit the country’s overall economy but will also enhance its image in the eyes of the people who enjoy activities such as hiking in snow-capped mountains, walking on beaches, trying a variety of food and appreciating the rich historical heritage and diverse cultures.

Pakistan’s perception as a tourist destination has been marred by the political instability for a very long time. But professional tourists like Will Hatton are helping to change the image of the country and its people by their first-hand experiences. Hatton describes Pakistan as the “ultimate adventure back-packing destination” and Pakistanis as “the most hospitable, kind and welcoming people” he had encountered. The people always insisted on feeding him and showed him around their local towns like royalty.

He also recounts that Pakistanis are fiercely anti-Taliban and most locals can speak some English. They are highly protective and caring about their guests. The portrayal of Pakistan in the mainstream western media augments the misperception about the country as a war-torn region. However, in reality, the Pakistani armed forces are combatting the extremist militants in the border regions to keep the country, its inhabitants and its visitors safe.

The increased security and the ease of obtaining visas will undoubtedly attract more tourists from around the world and also within the region. Moreover, tourism in Pakistan can benefit from better branding and media coverage. In a report in The British Backpacker Society, Pakistan was ranked as the number one adventure travel destination for 2018 among 20 other countries. A lot of this has to do with aspects ranging from the hospitality of the people to the wildness of the Himalayan mountains.

Despite their rough terrains and lofty peaks (five out of 14 world’s highest peaks present in Pakistan), the mountainous regions are quite accessible due to expertly engineered roads and one of the world’s highest paved highways, the Karokoram Highway. The Karakoram connects China with Pakistan and gains an elevation up to 4,693 meters (15,397 ft) above the sea level.

Pakistan is not only the cradle ground from Indus Valley Civilization but it also consists of several relics from the Gandhara Civilization to the Mughal era. Among the greatest cultural treasures of Pakistan are the Gurdwaras – the sacred shrines of the Sikh religion. Pakistan is also the birthplace of Guru Nanak, the founder of Sikhism.

Since Pakistanis welcome thousands of Sikh pilgrims from India and other countries around the world every year, improved geopolitical relations between India and Pakistan and better perception about tourism in Pakistan can be immensely beneficial in supporting both the Pakistani locals and the Sikh communities from around the world.

Apart from its cultural allure, Pakistan also is a great destination for an economical trip. The transportation, food and accommodation are relatively inexpensive. According to Hatton, a weekly budget of $100 would suffice. The rich ancient sites, the mesmerizing natural landscapes and the remarkably amiable dwellers make Pakistan a great destination for many tourists around the globe.

Regaining Its Reputation as a Tourist Destination

In the 1970s, Pakistan was a tourist hotspot and until the mid-90s, hotels were booked a year in advance. All this had suffered due to instability in the region. The government and the local people, realizing the negative impact that the political volatility has had on tourism, are working hard to revive tourism in Pakistan.

The Pakistani tourism industry, partnered with security agencies and private companies, has improved greatly. According to Jovago, the top hotel booking and e-commerce site in Pakistan, hotel bookings have increased by 80-90 percent in 2017, compared to the bookings in the previous years. This not only means greater revenue for the hotels and other local businesses but also a significant contribution in the GDP of the country.

The World Travel and Tourism Council (WTTC) estimated that the total contribution of tourism toward Pakistan’s economy was about $19.4 billion or 6.9 percent of the GDP, in 2017. Within a decade, this is projected to rise to $36.1 billion.

Improving tourism in Pakistan is perhaps one of the most viable ways to bring about a more realistic perception of the country’s landscape and population. Pakistan has a lot to offer. It is a county of cultural riches ranging from Gandharan relics to tombs from the Mughal era. It is a country of raging rivers and vast lengths of serene deserts. But, probably most importantly, Pakistan is a country of generous and warm people, who would invite their guests into their homes and serve them with the best food and comfort they can provide.