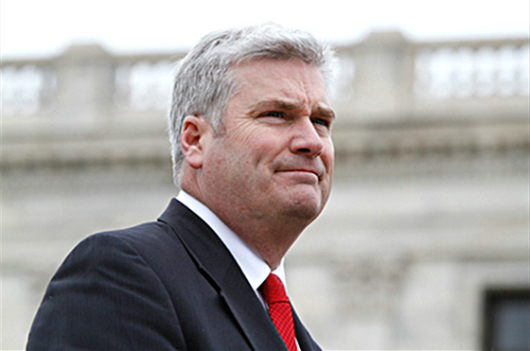 It’s not often that one hears a Tea Party conservative publicly supporting the use of the United States’ Federal Budget on foreign development aid. That’s what makes Rep. Tom Emmer’s, R-M.N., newfound support for the program both promising and surprising.

During a live online Q & A session held on May 12, Rep. Tom Emmer – whose conservative voting record includes challenges to Minnesota’s minimum wage and efforts to nullify the Affordable Care Act – described the ways in which his recent visit with recipients of U.S. foreign aid in Eldoret, Kenya influenced his perspective on the program.

“I have made the statement in the past that a dollar that we are spending for instance in Africa, in Kenya, is a dollar that we could probably be using at home to build a road or a bridge,” Emmer said. “Well, it’s not that simple.”

During his time in Eldoret, Emmer met with two dairy farmers who, with funding from USAID, improved their operation to such an extent that their increased income allowed them to accumulate enough money to send their three children to boarding school. “That bodes well for the future,” Emmer said, “and I guess I look at it this way: a dollar spent on that is a dollar that we won’t have to spend on additional bombs and bullets and God-forbid boots on the ground in the future.”

This sentiment is consistent with an argument commonly made by proponents of foreign development aid: investing in a greater quality of life for the world’s poor prevents them from looking for it in the form of violent extremist groups like ISIS or al-Shabaab.

The congressman also noted the potential benefits global poverty reduction holds for the U.S. economy. “Well, we need to have trading partners, both here within our boundaries, our borders, but [also] outside of our borders, because remember, 90% of the world’s future customers actually live outside of the United States,” Emmer stated. “We need to make sure that we’re constantly growing those markets so that we can realize a return of value, a valuable return on [our] products.”

Emmer’s change of heart is particularly encouraging given the staunch opposition to foreign aid among many leading Republicans, including presidential aspirant Rand Paul, who in 2012 argued the United States ought to eliminate foreign aid entirely. Indeed, this new stance is consistent with his recent deviation from the standard voting line of far right Republicans, a move that has earned him criticism from a number of his constituents.

That Rep. Emmer’s newfound attitude toward foreign aid so radically differs from that of more moderate Republicans like Paul shows that foreign aid doesn’t need to be an issue that is determined simply – and superficially – by party affiliation. A U.S. presence in impoverished nations, defined by effective economic assistance, creates opportunities for American companies abroad and increases the security of the United States by improving the lives of those whom extremist groups strive to recruit. These are outcomes that should appeal to Republicans and Democrats alike.