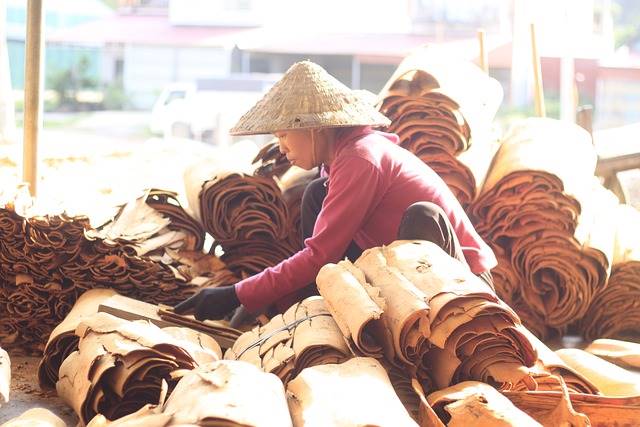 As unexpected heroes, the spices alleviating poverty in Vietnam are everyday seasonings that are saving the Southeast Asian nation. Since 2013, the Vietnamese spice industry has been practicing more sustainable farming and sharing knowledge between agricultural communities, helping to lift more than 80,000 households out of poverty.

The Spice Industry in Vietnam

By improving the spice value chain, the nation’s farmers have seen a 14.5% increase in annual income, improving their standard of living and allowing them the financial freedom to thrive rather than just survive. This is possible due to the increase in global demands for spices including cinnamon, turmeric, star anise, black pepper and cardamom.

With the profitable market that Europe and the U.S. have brought to the Vietnamese spice industry, many expect new regulations for safe production and quality control for the industry. Some spice farmers had to pivot to organic farming to meet these requirements and have since seen a great increase in profits as these Western nations pay higher prices in comparison to China and India.

To meet these requirements and appeal to Western markets, farmers follow the guidelines that the Regional BioTrade Project set. Vietnamese farmers now learn how to farm without chemicals like herbicides or preservatives, use special machinery for harvesting and label spices with their correct origins. These practices help to build a sustainability chain to keep the Vietnamese spice industry profitable for the future.

Several organizations have helped the Vietnamese spice industry reach this level of success. The Spice of Life Project, which the Swiss Agency for Development and Cooperation (SDC) and Cordaid funded, has helped thousands of spice farmers in Vietnam by creating the Spice Association to foster relationships between small community farmers and the state. These initiatives also improved irrigation, drying, slicing, processing and packing practices, yielding higher production and quality.

Providing these local farmers with this knowledge is essential to successfully use spices to alleviate poverty in Vietnam. The National Agriculture Extension Center (NAEC) and the Sustainable Trade Initiative (IDH) have introduced a National Sustainability Curriculum and Agrochemical Apps to properly train farmers to produce spices for the global market.

Exemplifying cinnamon’s potential is Trieu Mui Pham, a 94-year-old cinnamon farmer that saved her poverty-ridden village, Lao Cai, by planting cinnamon seeds. In 1974, she visited Yen Bai, a village that farming cinnamon had successfully revived. Pham decided to plant cinnamon seeds and waited patiently for years until she could harvest. Today, her cinnamon forest has more than 50,000 trees and her community is prosperous, an inspiring example of spices alleviating poverty in Vietnam.

While the spices alleviating poverty in Vietnam are improving people’s standard of living, spice farming has also helped to restore and protect the environment. Vietnam now focuses on farming and crop exports as opposed to felling trees for profit. Spices are lifting people in Vietnam out of poverty while contributing to the global economy.