Tag Archive for: The South African Department of Science and Technology 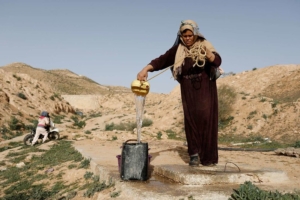 Water is the most basic necessity. Every living thing on this planet requires water in distinct quantities. Water as a diminishing resource seems like a distant nightmare for the great-great-grandchildren of this generation. However, in actuality, civilizations could be closer to having too little fresh water than they realize. People use approximately 70 percent of the world’s fresh water for agriculture and Dr. Ku McMahan stated that more than half of the world’s population could be without enough fresh water to meet basic needs like hygiene, growing food and having enough to drink by 2025. Luckily, the Securing Water For Food: A Grand Challenge for Development (SWFF) came into being to help solve this emerging problem.

At World Water Week in Stockholm in 2014, USAID and the Swedish International Development Cooperation Agency came together to pose crucial questions about how to grow more food while using less water and simultaneously supporting small farms. They determined the answer to be sustainable agriculture.

USAID and the Swedish International Development Cooperation Agency, along with the Foreign Ministry of the Kingdom of the Netherlands and the Republic of South African Department of Science and Technology, came together to launch an experimental program to help tackle the problem. Together they have gathered inventors and innovators working to improve farming and water usage with the resources and expertise to refine and test their inventions, help them reach more farmers and develop financially sustainable businesses.

SWFF is one of USAID’s 10 Grand Challenges. As of 2018, this program has in most cases exceeded the expectations of the program at its inception. According to the SWFFs semi-annual report in 2014, it expected the program to reach 3 million customers with sponsored innovators by 2018 (the original end-date of the program). Before the end of the program, SWFF innovators reached a combined 3.6 million smallholder farmers, their families and other customers.

SWFF’s 2017 annual report states how difficult it is to create financially sustainable enterprises while meeting the needs of extreme-poor and low-income households. Taking on the challenge of measuring poverty for specific innovations across an innovation portfolio, SWFF continues to make progress toward improving incomes and yields of farmers who are at or near their country’s poverty line. Estimates determine that 62 percent of innovation customers and end-users in the program at this time are at or near their country’s poverty line. SWFF more often focuses its efforts on assisting customers and end-users near the poverty line who could fall back into poverty easily with an economic shock or prolonged economic stressors.

Through research and attention to detail, the Securing Water For Food program was able to realize that 41 percent of its customers and end-users own their land and have multiple income streams. However, they have a very limited income overall, with little to spend on anything outside of their agricultural necessities. These low-income farmers caused a few difficulties within the experiment by selling the fish feed the program provided to them in order to make a quick profit.

To make its product more affordable, the SWFF innovator Water Governance Institute (WGI) introduced a prototype of its semi-commercial unit with an improved design. It has the same capacity as the older model at a 67 percent reduction in price. With this, WGI has helped generate nearly $30,000 in farmer income during the last two years.

SWFF innovators used every $1,000 of donated funds to impact 156 customers, produce 282 tons of crops, reduce water consumption by more than 832,000 liters and improve water management on 86 hectares of agricultural land, all while generating more than $200 in sales. They also used more than 2.4 million hectares of grazing lands and cropland under improved practices to help produce nearly 4 million tons of food. Expecting to reduce water consumption by 3.6 billion, the Securing Water For Food program outdid itself by tripling that amount and reducing 11.4 billion liters compared to traditional practices by the project’s target end date in 2018.

Sweden has more than a dozen ongoing water-related projects, including but not limited to its Less is More project focusing on the energy-efficient removal of micro-pollutants in wastewater and Aquanet, which studies the resistance and resilience of an ecosystem due to disturbances and environmental disturbances. Through SWFF’s partnership with the USAID, the Foreign Ministry of the Kingdom of the Netherlands and the South African Department of Science and Technology, it has been able to make strong, positive strides in producing sustainable agriculture.