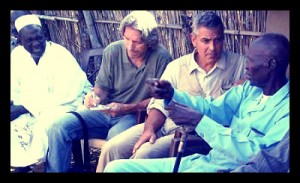 George Clooney needs no introduction as one of the most well known and highly acclaimed actors to come out of Hollywood, but he is perhaps less well known for being an all star activist. Clooney and John Prendergast, co-founder of Enough Project, teamed-up to found the Satellite Sentinel Project in 2010.

“Why can’t I be a guy with a 400-mile lens, …taking pictures and sticking them on the Internet?” wondered Clooney, being no stranger to the Paparazzi. The Satellite Sentinel Project puts Sudan’s most atrocious warlords under the spotlight, giving them the kind of international attention that they tend to shy away from. “We’re just going to keep the pressure on. Turning the lights on doesn’t mean anything stops. But it makes it harder,” said George Clooney in Parade Magazine.

Their work begins 300 miles up, with satellites that capture the big picture. Those images are closely studied for the tell-tale signs of the devastation of warfare, like villages wiped from the map or mass graves. This provides a close to real-time view of atrocities as they are happening, so SSP can be one of the first to sound the alarm. Next, reporters in Sudan investigate even further, interviewing locals and gathering more detailed photographic evidence. Once they verify that civilian atrocities are happening, they spread the word and call on human rights groups and global citizens to mobilize. “The world is watching because you are watching” is the mantra of the SSP.

Observers have praised Clooney’s work with SSP for playing a critical role in South Sudan’s movement toward independence, following the genocide in Darfur with a death toll of over 2 million. More recently, Clooney generated some serious publicity for SSP when he was arrested in a protest in front of the Sudanese Embassy in Washington, D.C. The arrest came after he brought his case for US intervention in Sudan before Congress, and the at Obamas’ house for dinner.