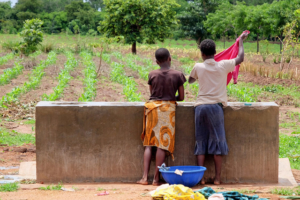 In 2016, about 51% of Malawians lived in poverty, an improvement from 65% in 1997. Still, with 76.9% of the population employed in the agriculture industry, frequent droughts and floods are major issues that devastate farmers and Malawi’s economy. Keep reading to learn how irrigation projects are working to reduce poverty in Malawi.

Flood control and irrigation systems funnel floodwater into areas of storage for future use. One system is diversion canals, such as the Red River Floodway in Winnipeg, Canada. The diversion canal prevented 10s of billions of dollars in damage since 1968 and is the second-largest earthmoving project after the Panama Canal. Diversion canals are artificial floodways that send floodwater to ponds, rivers, reservoirs and irrigation systems. Most farmers do not relocate unlike the displacement that a dam causes to locals in the dam’s region. Although the Red River Pathway is a highly ornate design, a basic diversion canal helps indirectly reduce poverty in Malawi and benefits those that crop-damaging floodwaters affect.

The pathways direct flooded water away from homes and crops so that it flows into rivers, ponds and artificial lakes. The pathways directing floodwater that destroy homes and land are a long-term solution to floods and droughts. The downside to these pathways is the unknown cost of infrastructure necessary to accomplish this system as no one, including Malawi, has proposed or implemented major developments in the country.

A prerequisite to water management is infrastructure development to provide stored water from floods to irrigation systems. Pipes allocate water to farmers, whether above or below ground and irrigation systems, such as surge flooding, bring a simple solution to irrigation for a country where only 9% have electricity. Surge flooding is a system of gradually releasing small amounts of water into the land. This allows for better infiltration and less runoff.

Malawi relies heavily on charities and countries for aid, and developmental progress has been slow. The country ranks as one of the least developed countries. Investment in the county’s infrastructure could reduce poverty in Malawi, help the economy grow and diversify into other areas besides agriculture, such as the energy, telecommunications, banking, manufacturing, information technology and tourism sectors. Dr. Saulos Klaus Chilima has been Vice President of Malawi since 2014 and stated a need for change in not only investment in infrastructure development, but also many other areas that are undeveloped. He understood that half of all Malawians, particularly women in rural regions, are in extreme poverty and that an emphasis on development is the key to the country’s future success.

Climatic changes frequently affect Malawi, though it receives support externally. Recently, the World Bank donated $70 million to Malawi to help it recover from Cyclone Idai, yet external aid is simply a short-term solution. Improving infrastructure to combat climatic changes, such as cyclones, floods and droughts, supports the people of Malawi that have crops that natural disasters easily damage. Floods and droughts destroy crops that more than 80% of Malawians rely on for food and a meager income. One solution to reduce the cycle of flood, drought and famine is through an intelligent design implementing irrigation and flood control across Malawi.