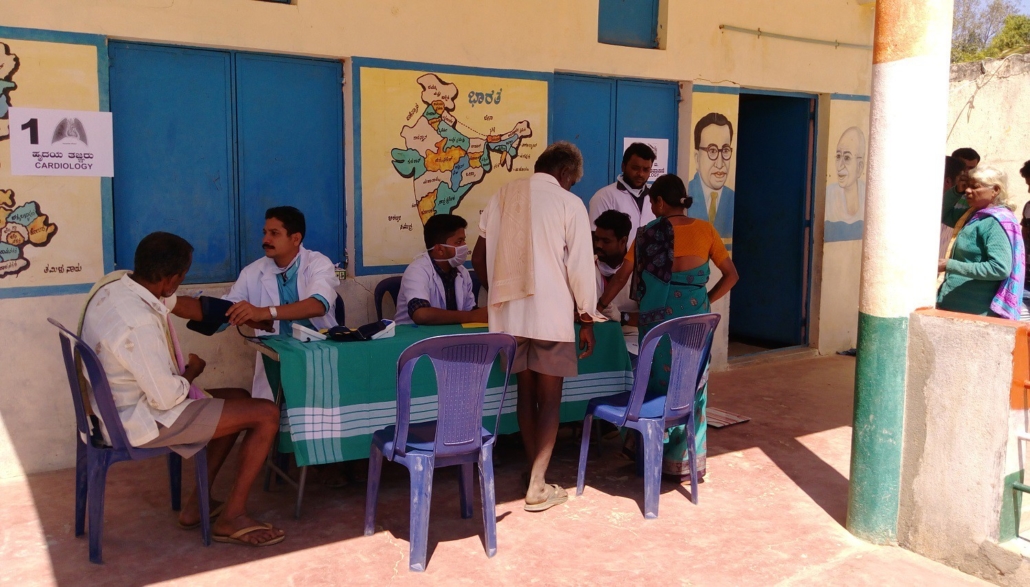 The government of India and international organizations, like WHO, are attempting to improve healthcare in India to make it accessible for every section of its society. However, healthcare in India is far from reaching its goal of universal healthcare. The following are some of the hurdles that India faces.

India’s population is around 1.3 billion, but it has a low number of medical and paramedical professionals. In fact, the density of doctors was 80 doctors per 100,000 of the population in 2001 and the number of nurses was 61 per 100,000. According to WHO recommendations, a physician to population ratio should be at least 1 to 1,000, whereas India’s physician population ratio is 1 to 1,674. India needs around 2.07 million more doctors to reach the goal of 1 to 1,000.

Despite the lack of medical professionals, the urban-rural disparity is also a major hurdle in healthcare in India. According to a WHO report, there were 1,225,381 health workers in urban areas in 2001 and 844,159 in rural areas. While 70 percent of India’s population resides in rural areas, access to healthcare is inefficient compared to urban areas. For example,84 percent of the 23,582 hospitals only hold 39 percent of the total of government beds.

To combat the limited number of healthcare professionals in India, the Indian Government has made a strategic investment in its healthcare. In 2005, it launched the National Rural Health Mission (NHM), which people know as the National Health Mission. The main purpose of this organization is to ensure quality and affordable healthcare for all. In addition to this, Nation Health Policy (NHP) 2017 focuses on the requirement of healthcare management in the country. This policy has implemented a new public health management cadre in all states.

Despite India’s fast economic development, people in the country often have low health awareness, low education status and poor functional literacy within the healthcare system. According to a report in the Indian Journal of Community Medicine, only one-third of the antenatal mothers in India have adequate knowledge of breastfeeding. It also stated that around 1 million newborn infants die every year because of umbilical cord infection which an optimal breastfeeding practice could avoid.

The Indian Government’s National Rural Health Mission intends to provide aid for neonatal and childhood illness through its existing healthcare delivery system. It has also created the Pradhan Mantri Matru Vandana Yojana and applied amendments to the Maternity Benefit Act, 1961. The amendment protects women’s employment as well as women’s and children’s well being during maternity. In 2016, the Indian Government started the Mothers Absolute Affection program, which is to promote, protect and support optimal breastfeeding across regions of the country.

India’s interim budget only allocates 2.2 percent for healthcare. Despite several health reforms, the government is still not able to increase public health spending to 2.5 percent of its GDP. Right now, the current health expenditure in India is only 1.15-1.5 percent of its GDP.

The government is trying to fill the gap between public and private healthcare and has implemented the Rashtriya Swasthya Bima Yojna (RSBY) insurance plan to do this. The main purpose of this insurance plan is to provide low-cost insurance. According to the Indian Government’s data, around 44 percent of people from below the poverty line enrolled in RSBY from 2014 to 2015. Now the fund for this insurance scheme has increased from $4,000 to $14,000 per family. RSBY insurance could help impoverished people receive quality healthcare at a low cost. This subsidized healthcare policy would provide people a choice between public and private hospitals so they can receive quality treatment.

Fraudulence and corruption are big hurdles in healthcare in India. Corruption is common at both the higher and service delivery levels, undermining the accessibility, affordability and quality of healthcare. Some of the common problems at the service delivery level include absenteeism, informal payments from patients, embezzlement and theft, service provision, favoritism and manipulation of outcome data.

The nationwide average absentee rate for doctors and healthcare providers is around 40 percent. Meanwhile, in 2013, Oxfam reported that medical professionals performed many unnecessary hysterectomies on women. Additionally, there was a large conspiracy in healthcare construction in Orissa, India, where 54 of the 55 hospitals built in Orissa had construction problems. Moreover, according to The Guardian, “The Indian healthcare system is one of the most privatized and largely unregulated healthcare systems.” A report by Dr. Gadre found that large numbers of doctors give irrational drug prescriptions while hospital patients often receive pressure to pay for an unnecessary operation or procedure.

A limited workforce, lack of awareness, education and medical qualification of healthcare professionals, corruption and healthcare expenses are inhibiting the improvement of healthcare in India. However, the Indian Government has projected many programs and schemes to improve the healthcare condition of Indians. Organizations like WHO, UNICEF, the Bill and Melinda Gates Foundation are also providing aid. Through public contribution and the Indian Government’s efforts, India should eventually reach its goal of universal health coverage.