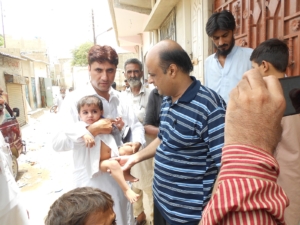 Polio, for many in the United States today, is not much more than a history lesson. Whether it is former President Franklin Delano Roosevelt’s battle with the disease or the innovations of Dr. Jonas Salk in his creation of a vaccine, the illness tends to only touch most people through books and movies, or when a newborn is vaccinated. Over the last few decades, much of the rest of the world has shared in these triumphs. It is still present in the human population and though outbreaks are diminishing, they do occur. After experiencing significant progress throughout 2021 and for some time into 2022, there are new cases of polio in Pakistan.

While most people will clear the polio virus without experiencing serious issues, its debilitating symptoms can leave victims with brain and spinal cord injuries. Polio will cause meningitis in around one out of 25 people infected and paralysis in one out of 200. Furthermore, adults who have previously recovered can develop post-polio syndrome which presents itself as new muscle pain or paralysis later in life.

For centuries, people lived with the fear of disability from this disease. Since the advent of vaccinations, the vast majority of nations have eradicated polio. Pakistan, along with its neighbor Afghanistan, has been slower to share in this progress. These two countries are the last where polio is still considered an endemic disease, meaning that it is constantly spreading.

Cases have been diminishing for a long time, however. For example, the incidence of paralysis from polio in Pakistan fell from around 20,000 in the early 1990s to just 84 in 2020. The country recently experienced a hiatus in polio detection that lasted from January 2021 until April 2022 when the diagnosis of polio in a baby boy in the North Waziristan district interrupted the progress, The Guardian reports. Eleven children in Pakistan have been diagnosed with the illness since.

Why is Polio Resurging in Pakistan?

Polio continues to cause outbreaks in Pakistan for much of the same reason that other diseases as many in the population do not have immunity against it. Polio vaccines have proven to be highly effective on the individual level and can create herd immunity when around 80-85% of the population receives a vaccine.

Reaching the level of vaccine coverage that herd immunity from polio requires is difficult because of the misinformation surrounding vaccines in Pakistan. Due to vaccine hesitancy, some parents in Pakistan have obtained fake vaccine markings or simply refused inoculation. Even when they do follow through on receiving a vaccine, mistrust is still high. In 2019, more than 25,000 students asked for hospitalization after unsubstantiated claims of adverse vaccine reactions spread in northwest Pakistan.

Mistrust is not just an endogenous problem. The actions of foreign entities have also caused harm to Pakistan’s health system. In 2011, the CIA ran a fake vaccination program, which collected blood samples of children in an attempt to track down Osama bin Laden by finding his relatives. Oxford University Press article demonstrates that news of the CIA’s campaign not only led to a drop in vaccine uptake between 23% and 39% but also empowered extremist groups.

These groups have engaged in violence against vaccination workers that carry on to this day. Most recently, on June 28, 2022, a gunman killed a polio worker and two policemen involved in vaccination.

What Are the Solutions?

While imperfect, things are far from grim in the fight against polio in Pakistan. As noted earlier, the incidence has plummeted in the last few decades. Much of this is due to vaccine drives from a number of sources including the government and international organizations.

Since the 1990s, the Pakistani government has partnered with the Pakistan Polio Eradication Initiative (PPEI), a group that a consortium of international organizations funded, to create the annual National Emergency Action Plan (NEAP). These plans have demonstrated success through various initiatives to immunize populations via vaccination programs, disease surveillance and outreach.

Under part of its plan, hundreds of thousands of vaccinators go door-to-door offering immunizations to children below the age of 5. Another method these groups have employed to keep spread in check is regular wastewater inspections. This gives public health officials a better idea of disease prevalence and where it is spreading. Finally, to counter much of the misinformation and hesitancy, the plan calls for partnerships with civil society and religious leaders to mainstream the use of vaccines.

Though most countries technically eradicated polio, Pakistan is not alone in the recurrence of it. In 2022, cases have occurred in 30 countries across Africa, Europe and the Middle East. In June 2022, the United Kingdom detected the disease in London’s wastewater. With a polio vaccination rate of 86% in London, a significant part of the population is susceptible to infection demonstrating the danger that festering diseases, such as polio, pose to people all around the world.