Tag Archive for: The Organization for Poverty Alleviation and Development 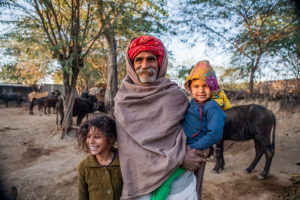 The term “extreme poverty” is often used in political and humanitarian discussions. However, what does it really mean? About 734 million people around the globe live in extreme poverty. This means they live on $2 or less every day. It can be difficult for many people to grasp this concept. As a result, discussions about extreme poverty often focus on statistics in order to rationalize the issue. To truly comprehend what living in extreme poverty is like, statistics are not the only important information to take into consideration. Anecdotes and firsthand accounts from people living in this type of poverty are necessary for comprehensive understanding. They are the ones who can truly tell about their experiences and everyday lives as people living on less than $2 a day.

Serin wakes up every day and begins making Koko, or porridge, to sell throughout the day. She makes the equivalent of $1.12 each day. Her husband does not have a job. Consequently, she has to take out loans to feed her family, including her young children. Although she works to save her money, it is difficult to do so when her family members fall sick so frequently due to unhygienic living conditions. She is the provider for the family like so many other Nigerian women in communities like hers.

Lal pulls people and packages behind him on his rickshaw every day not because he likes to, but because it is the only stable job he can find. He supports himself, his wife and their three children. Lal takes the bus into the city every day where he then picks up his rickshaw and begins his long day of work. He sometimes walks up to 10 kilometers in just one day. Lal hopes his children will grow up to have a better education than himself. However, their family simply cannot afford to have any savings.

Akolgo is a peasant farmer, and his only source of income is his crop yield. In 2017, he put all of his money towards his farm crops in hopes of raising money to rebuild his home that was falling apart. Although he raised enough money to do so, his house flooded later that same year. His family has been homeless ever since. He receives $26 every three months from his government, but this is far too little money to rebuild his home how his family needs it to be.

Devli works as a day laborer doing manual labor. She takes the bus into the nearby city each day and waits for a contractor to hire her for the day. Her most common tasks include shoveling rocks and carrying rocks on her head at construction sites. She typically earns a little more than $2 each day, but the cost of her daily bus tickets dwindle that amount down so that she is living on less than $2 a day. She is divorced from her husband and raising her two children alone.

Although these stories are upsetting, they are crucial in understanding what living on less than $2 a day really looks like. The good news is there are several organizations doing great work to help those who live in extreme poverty. With over 70 years of experience, Oxfam International works with over 90 countries across the globe. In 2019 it directly helped 19.5 million people with their programs. It focuses on collaboration with communities who need help the most and long-lasting solutions driven by innovation.

The Organization for Poverty Alleviation and Development is another nonprofit organization. It is currently working on 31 global projects across several countries. One of its aims is to tackle issues one at a time in whichever community needs its help the most at a given time. It also has well-established emergency relief and response programs to prepare for the unexpected.

Another nonprofit fighting extreme poverty is Concern Worldwide. Its reach extends to 23 countries and its initiatives in those countries are guided by six central themes of poverty. In 2019 alone, Concern Worldwide helped 11.5 million people through their emergency response programs and 15.1 million people through their long-term development programs.

Living on less than $2 a day is something no human should have to endure, which is why nonprofits like these are so important in our contemporary global community.