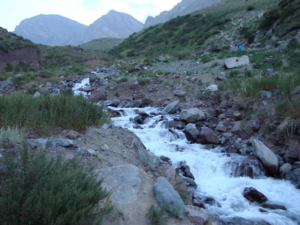 The increasing demand for centralized electrical power has put growing pressure on the government to modernize Kyrgyzstan’s hydroelectric capacity. 1“’s government has sanctioned the expansion of its energy infrastructure to mitigate extreme poverty and improve access to fundamental necessities in rural communities. As a focal point of its export economy, hydroelectric power modules supply 76 percent of its electricity. With lowering water inflow and deteriorating infrastructure, Kyrgyzstan faces a unique problem in mitigating and expanding its hydroelectric import/export industry while balancing the rampant poverty and income inequality among rural and urban communities. The surrounding Kyrgyzstan economy relies mostly on agricultural cultivations and the cotton export industry. With the increased development of modules of hydroelectric power in Kyrgyzstan, the controlled water supply offers the potential for massive growth in the agricultural industry. As a renewable energy source, hydroelectric energy provides the potential to control the rate at which the water flows and of the amount used, which is crucial to energy production.

Traditional agricultural methods that rural communities commonly practice create the potential for extensive economic growth through the implementation of an updated hydroelectric system. Through a controlled system, the irrigation of various crops is more efficient with a renewable energy source that has less pollution. With substantial economic implications, hydroelectric power in Kyrgyzstan encourages more commercial enterprises to migrate to agrarian areas where people cannot access basic public services like running water and education as easily.

With 32 percent under the poverty line, the need for a centralized hydroelectrical grid can have vast socioeconomic implications, with an improved water supply system and improved access to basic health necessities. With Kyrgyzstan’s main hydroelectric infrastructure outdated and in need of a sufficient upgrade the inconsistency attached to this older hydroelectric module creates insecurity in basic necessities. With access to basic social programs tentative on ideal weather conditions in urban communities, the expansion of clean renewable energy sources can potentially create an influx of economic prosperity and improve energy efficiency throughout the country.

A focused effort toward improving consistent energy output will allow the quality of life to improve and give the impoverished a promising start toward economic mobility with increasing hydroelectric power in Kyrgyzstan. Reducing toxic chemicals put into the air from traditional cooking/heating methods in rural communities can allow room for a more comprehensive hydropower infrastructure. Rural communities on average tend to use more fossil fuels with more than 60 percent using those perishables due to inconsistencies within hydroelectric distribution and no updated grid system that would make those other methods obsolete.

Since its independence, Kyrgyzstan established a network of standard practice in energy distribution with a comprehensive legislative agenda. People are underutilizing the potential for an increased hydroelectric presence as a larger kinetic energy source with geographically crucial bodies of water producing 5-8 billion kW·h per year and the country only using 3 percent. A more consistent hydroelectric grid is necessary for Kyrgyzstan’s economy to boost its agricultural sector. The government introduced the National Energy Program that assists in renovating abandoned hydropower plants and initiates constructing new ones. Additionally, government sectors have committed to actively work on the cultivation of Kyrgyzstan’s massive untapped energy sector. Along with a growing private sector and updated technology to improve the essential food and health infrastructures hydroelectric power in Kyrgyzstan will increase the capacity of its economy.