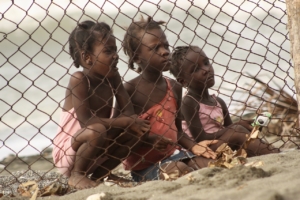 Haiti is the poorest country in the western hemisphere with a UNDP national poverty index ranking of 68th. The country is also home to one of the world’s most populated cities without a centralized sewage system –  Port-Au-Prince. Although the developing country is vibrant, Haiti is still struggling. Since the initial destruction that the 7.0 magnitude earthquake in 2010 brought, cholera and HIV have ravaged the nation. However, as a direct result of the CDC intervention in Haiti, the nation has not fallen. The CDC has provided financial and technical assistance to the Government of Haiti (GOH) since 2002. In the 2010 earthquake’s aftermath, the CDC refocused on both immediate health necessities and public health systems within days of the U.N.’s arrival. CDC intervention in Haiti assisted the GOH in developing disease surveillance systems and establishing a competent public health force aimed to aid Haiti in developing a proper disease outbreak response.

This past decade, Haiti has not seen much progress due to reform efforts growing stagnant. Subsequently, the changes the country has seen thus far have turned out to be unsustainable and/or have been ill-fitted solutions to Haiti’s unique predicament. Fortunately, CDC intervention in Haiti has been critical to the continued survival of many, and the number of people saved will hopefully continue to grow.

Haiti’s Cholera Epidemic and the CDC

The GOH and the CDC have also been collaborating to devise a longterm plan to eliminate cholera. CDC intervention in Haiti has increased patient case surveillance, laboratory capacity, oral cholera vaccine (OCV) administration and clean water and sanitation access in efforts to curb cholera’s spread.

One of these efforts includes the Haitian Ministry of Health (MOH) building the National Cholera Surveillance System (NCSS) in conjunction with the CDC support. The platform is a rapid identifier of concentrated outbreaks, providing critical guidance to further prevent future outbreaks. Thanks to these efforts, along with others, incidence rates dropped from 112 cases per every 100,000 in 2017 to 25.5 cases for every 100,000 in 2018.

The CDC’s “Foot-Soldiers” in the Battle Against Cholera

Through the design of training programs, protocols and supplemental assistance, the CDC has created an entirely new workforce titled TEPACs or officially the Techniciens en Eau Potable et Assainissement pour les Communes. Having been key in Haiti’s disease prevention, these “foot-soldiers” ensure the safety of water sources, improve sanitation standards and routinely assess communal water systems and sources for free chlorine. They also performed Haiti’s first inventory of those sources; inventory of resources provide valuable information to donation/volunteering groups. Alongside the efforts of the CDC, TEPACs has launched the WASH initiative – coordinated work in the area of water, sanitation and hygiene – in a supplemental effort to eradicate cholera from Haiti.

CDC Impact On the AIDS Crisis

It is estimated that 150,000 people living in Haiti have HIV/AIDS. CDC intervention in Haiti is achieving more control over the AIDS epidemic. Outlining the concern of the epidemic and the impact of CDC support, 98 percent of all pregnant women and 100 percent of TB patients that CDC clinics saw received tests for HIV. Further, all TB patients that tested positive for HIV also received antiretroviral therapy (ART) in 2018.

A Solution to the Underlying Sanitation Problem

While recovery has been slow, CDC intervention in Haiti has been an immensely influential factor in public health. One aspect of public sanitation the CDC does not have a direct influence on is the waste that litters Haiti.

Today, the capital, Port-Au-Prince, is still without central sewage. With every rainfall, a potentially lethal flood of human fecal matter, urine and other harmful substances accompany the water.

The country is in dire need of infrastructure reforms specifically for the needs of Haiti and its people. The CDC has dedicated itself to controlling and minimizing epidemics, but it has yet to address flooding latrines and a lack of proper sewage disposal systems despite their inflammatory influence on disease.

Flaure Dubois has a potential solution to Haiti’s flood problem. Dubois proposes the Haitian government hire those working to clean latrines, called Bayakous, to create jobs for Haitian citizens. Officializing the Bayakou occupation would bring a wage increase and higher public esteem. If the GOH and the CDC work in conjunction with Bayakous to educate citizens about the dangers of raw sewage, people might be more willing to pay for Bayakou services. Further, it would encourage the sewage shipment to treatment plants, rather than it going into canals. A larger influx of latrine waste enables Haiti’s one functional plant to operate at peak performance and support economic growth in the sanitation sector.

Government-funded Bayakous provide a basis to expand Haiti’s waste-management industry, eventually increasing aptitudes for efficient waste treatment/disposal methods. Expansion of this industry could result in a higher degree of sanitation and a lower rate of disease transmission.

The GOH or the CDC’s involvement in waste management would lead to superior safety and higher circulation of information for Haitian citizens and workers in the sanitation industry. Employing Bayakous has the potential to sponsor the country’s most important pillar in ensuring safe water sources and sanitation. By offering better equipment, methods and working conditions CDC intervention in Haiti can support sustaining health improvements. Haiti needs a sustainable solution to the root of its sanitation problem before it can begin to have lasting-recovery.