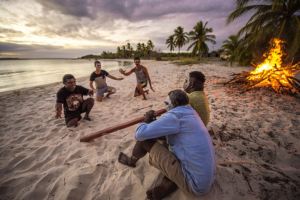 In 2017, Australia’s medical system was ranked 2nd globally by The Commonwealth Fund. The country scored well on care, efficiency and health outcomes. However, the Australian health care system scored poorly on equity of care across the population. Those largely affected by the healthcare discrepancy are members of the indigenous community. Australia is working to decrease the inequity in Aboriginal healthcare.

Health Challenges for the Aboriginal Healthcare

Another discrepancy in Aboriginal healthcare is access to maternal health services. In 2016, 40% of indigenous women lived in very remote areas of Australia, where the access to hospitals equipped with a birthing ward is very low. Women were forced to travel long distances in order to access birthing services. The Australian Institute of Health and Welfare cites that access to “culturally appropriate” care is a major barrier to women seeking maternal services. However, the Australian government has taken a new approach to bring healthcare to indigenous Australians.

In Australia, healthcare centers operated by the local indigenous community have shown success in providing medical services to the Aboriginal population. ACCHS aims to provide healthcare to indigenous communities in a way that fosters ongoing medical relationships. These relationships between Aboriginal healthcare providers and the Aboriginal community have been 23% more effective in retaining patients when compared to other healthcare centers. NACCHO believes that a major factor in patient retention is that ACCH centers provide a sense of “cultural safety” within its healthcare practices.

In 1970, the first ACCHS was established and, as of the year 2020, over 140 ACCHS centers are now being operated around Australia. ACCHS centers currently address 61% of the healthcare demands of patients in regional communities. The use of ACCHS centers is continuously growing within the Aboriginal population, demonstrating the success of the initiative. Over a span of 24 months, the NACCHO reported an increase of 24,030 patients.

The Future of ACCHS and Indigenous Communities

The ACCHS initiative also provides opportunities for regional and remote Aboriginals to gain entry into the healthcare profession. The census in 2006 reported that 99% of healthcare workers out of all of the Australian medical workers are not of indigenous descent. Over half of ACCHS workers are indigenous, however, many of these workers are non-clinical staff members. NACCHO strives to create pathways for Aboriginal health care workers through the ACCHS centers. These pathways will allow indigenous community members to operate ACCHS centers, potentially increasing the relationship between patients and healthcare providers.