Tag Archive for: The Myanmar Government 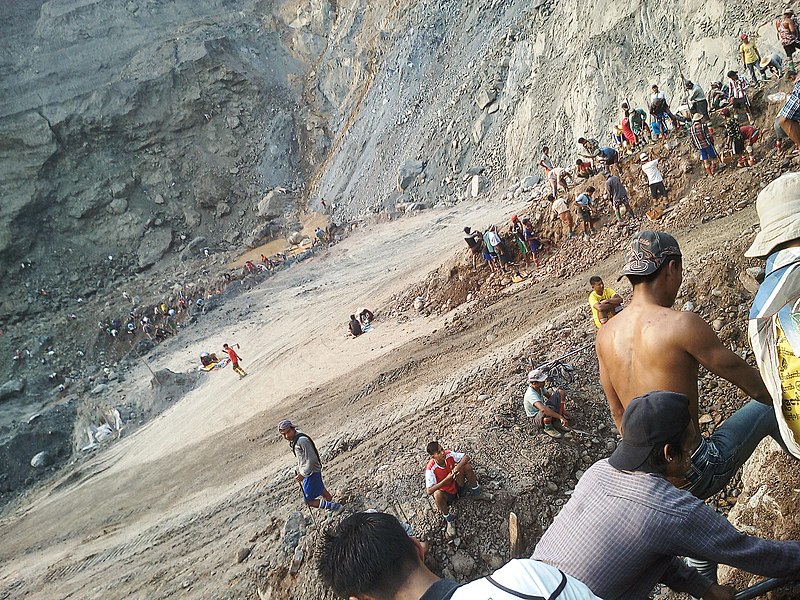 Myanmar, previously known as Burma, is a country flourishing in high-quality gemstones and other precious stones that bring a rise in income to the nation. Despite the quantity and quality of stones naturally produced, corruption and mismanagement in Myanmar’s mining industry as well as a weak political system lead to the ongoing cycle of both environmental and economic deterioration, also known as the “resource curse.” Myanmar’s gemstone industry has caused instability and conflict rather than improving the quality of life for citizens and providing additional employment to the country. This is also the main reason Myanmar remains economically underdeveloped.

On February 28, 2022, a landslide from mines in Myanmar’s town of Hpakant buried dozens of scavengers and miners in search of jade stones. Some official media sources confirmed two deaths, while aid workers and residents claimed a minimum of 23 deaths that day and an additional 80 missing individuals. This is an additional indication of the obstructive corruption occurring in the country.

In 2021, the United Nations Development Programme (UNDP) predicted that by 2022, 48.2% of Myanmar’s population could end up living in poverty compared to 24.8% living in poverty in 2017. Those living in poverty survive on 1,590 kyats daily, which is equivalent to $1 per day. Because Myanmar is a resource-rich nation, the country has significant potential for reducing poverty rates throughout the nation, yet, only a few individuals share in the revenue that comes from Myanmar’s gemstone industry. Locals do not benefit from the wealth the gemstones bring to the country.

Corruption in the Gemstone Mining Industry

Corruption is rife in Myanmar’s gemstone mining industry. Mining companies must pay a permit fee to the Mynamar mining industry to secure a mining permit. However, these figures are undisclosed and companies have to sign confidentiality agreements with authorities that must not be revealed to others. Failure to provide illicit payments to the ministry and local authorities can lead to delays in permits. Although the laws remain, all mining licenses in the township of Hpakant expired in 2019 and 2020, but mining still continues.

Hpakant, a town rich in many types of gemstones and precious stones, contributes to Myanmar’s gemstone industry the most. In these mines quartz, jade, amber, chrysoberyl, sapphire, moonstone, topaz, diamonds, tourmaline, peridot, garnet and ruby are a few of the many types of stones that miners can find.

However, many ethnic minority groups have to compete with Myanmar’s armed government to proceed to mine. This means resources fall into the hands of only a select few, increasing both inequality and poverty across the nation.

Myanmar is struggling with a severe economic downturn as more than 20 million people, in 2021, endured poverty. The United Nations has about 2,500 people working in Myanmar to provide those in poverty with assistance. About 1.7 million people received cash and food aid from the U.N. in 2021. But, even the U.N. is facing monetary shortfalls and is having trouble reaching those who need assistance as permission is necessary to travel to certain areas. The U.N. describes this permission process as “long, lengthy and bureaucratic.”

Certain human rights activists are asserting that many major jewelers should not proceed in buying gems from Myanmar as a way of applying “pressure on Myanmar’s military leaders by limiting profits from the country’s lucrative mining industry.”

Rep. Gregory Meeks introduced the Burma Act of 2021, which forbids any imports of Myanmar’s gemstones to the U.S. Popular jewelry companies such as Tiffany & Co., Harry Winston, Kay Jewelers, Jared and Zales have also declared that they will not purchase any gemstones sourced from Myanmar. The House of Representatives passed the Burma Act of 2021 on April 6, 2022.

Since 2015, more than 500 deaths have come about through landslides in Myanmar, with many of these landslides stemming from mines.

The attempt to call on the international community to halt purchases of gemstones from Myanmar is a step in the right direction as it limits the profit that the Myanmar government yields. With the help of the U.S. Congress and various human rights activists, Burmese people may look to a brighter future.