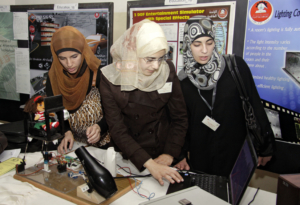 Women’s Economic Contribution: What is Going On?

Regarding women’s rights in Jordan, there are many contributing factors that made the country rank 144 out of 149 countries in economic participation and opportunity. Ranging from lack of transportation to social norms, here are some reasons why women do not work as much as their male counterparts:

Fortunately, there is a current action plan in place that aims to solve these issues regarding women’s rights in Jordan and the country’s workforce inequality. For example, the Jordan government implemented the Women’s Economic Empowerment Action Plan and the Mashreq Gender Facility supports this plan. The overall goal of this plan is to increase women’s participation in the workforce by 24% in a span of five years. After five years, the government hopes the action plan will have increased women’s opportunity to become business owners. The plan also aims to provide safe and inclusive work environments. As a result, more women will be able to successfully join the workforce.

There is a lot that needs to occur for the action plan to be successful. As of now, the action plan is focusing on things such as legislation. It also focuses on constraints that are keeping women out of the workforce, creating a welcoming and comfortable work environment, breaking the social stigmas connected to women working and increasing the female employment rates in the private sector. Certain tasks that the action plan will accomplish in order to get to this point are:

The Women’s Economic Empowerment Action Plan has explained other actions it will take to achieve its goal as well. One can access these actions through the World Bank website to learn more. Hopefully, after the five years are up, women’s rights in Jordan will have made a significant improvement and women will be able to contribute to the economy.