Tag Archive for: The Malaysian Ministry of Finance 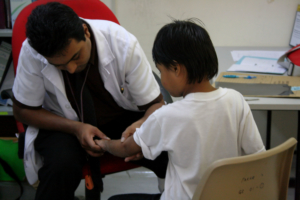 The organization of Malaysia’s healthcare system is a two-tier system that is comprised of public universal access for all the country’s citizens and private access for others. The government works closely with the healthcare industry to improve and promote the system of healthcare in Malaysia. As a result, the nation takes pride in being a medical tourism hub and holding the status of the “world’s healthcare marvel.”

In October 2018, Malaysia became the first country in the Western Pacific region of the globe to eliminate mother-to-child transmission of the diseases HIV and syphilis. Prior to this accomplishment, about 1,000 Malaysians were born with HIV/AIDS in 2007. According to the World Health Organization, Malaysia began the effort to combat HIV/AIDS transmission in 1998 with antenatal screenings.

Ms. Sherene Azli, Chief Executive Officer, Malaysia Healthcare Travel Council, shared with The Borgen Project that healthcare in Malaysia has three selling points: it is high quality, cheap and the doctors speak English. Not only are most medical staff fluent in English, but some hospitals have translators for over 22 languages. International Living recognized Malaysia as the “best nation in the world for healthcare” from 2015 to 2019 and ranked the nation as the seventh-best place to retire in 2020. Healthcare in Malaysia is highly affordable, said Azli, and therefore, it is very competitive compared to the Western world. Healthcare costs can be anywhere from 40 to 70 percent cheaper compared to the U.S. or U.K.

Further, healthcare in Malaysia adheres to Muslim standards, and therefore it can accommodate any citizen or medical tourist with strict religious restrictions. Azli told The Borgen Project that “Malaysia is a Global Halal Hub, which is good news for Muslim healthcare travelers. Malaysian society is Muslim-friendly. All Malaysian hospitals serve halal food and provide prayer facilities. Porcine-free medical products, such as sutures and vaccines, are also available at medical facilities. Many Malaysian medical professionals and personnel are Muslims too.”

Medical Tourism as a Thriving Industry

The MHTC is an initiative under the Malaysian Ministry of Finance that works to grow the healthcare travel industry by building Public-Private Partnerships (PPP) that combine state-run industries with private companies. From a conversation with the MHTC, the organization spoke about a planned campaign for healthcare travel throughout the year 2020. Unfortunately, in March 2020, MHTC announced the program’s deferment to the following year.

“We serve as a driver and catalyst towards positioning the country as the leading global destination for healthcare,” said Sherene Azli. “Malaysia is one of the few countries in the world where healthcare travel is a government-supported industry while being driven by the private sector.”

Many people from surrounding countries come to Malaysia for healthcare needs. Most of the doctors have Western training and speak English, making healthcare in Malaysia perfect for tourists and expatriates. The Malaysia Healthcare Travel Council reported an increase in 2011 from 643,000 medical tourists to over 1 million in 2018. Some in-demand fields are cardiology, oncology and in-vitro fertilization (IVF).

Healthcare in Malaysia in Response to COVID-19

Much like the shelter-in-place orders in the U.S., Malaysia imposed a Movement Control Order (MCO) after the outbreak of COVID-19. This movement restriction encourages Malaysians to practice social distancing. The nation was the first in the region to impose such restrictions. As a result of these orders, the MHTC reported a 45 percent recovery rate.

The government has scrambled to help its citizens. For example, shelters have been providing protection for the nation’s homeless from the virus. The Malaysian government is also collaborating with the United Nations High Commissioner for Refugees to protect people in Malaysia with refugee status. In addition to these actions, Malaysia passed RM260 billion as a stimulus package for the nation’s people.

The largest glove manufacturer in the world, Top Glove Corporation, resides in Malaysia. It manufactures one in five gloves around the world. Malaysian manufacturers are working to help flatten the curve of COVID-19 by converting facilities and providing more PPE. Top Glove Corporation plans to produce face masks in two months at a facility that retrofitted itself for the new product. Another company, Karex, will convert two lubricant lines into hand sanitizer manufacturing.

Although the MHTC acknowledges the hardships the pandemic has caused and will continue to cause the industry, it should continue to prepare for an economic rebound. “Over the next five years, Malaysia healthcare will focus on three key initiatives namely, the Fertility and Cardiology Hubs, being the Centre of Excellence for Oncology, as well as the Flagship Medical Tourism Hospital Programme,” Azli said.

Going forward, it remains a priority to position healthcare in Malaysia first so that it can prevail as a global medical leader.