Tag Archive for: The Latin American Network of Sex Workers 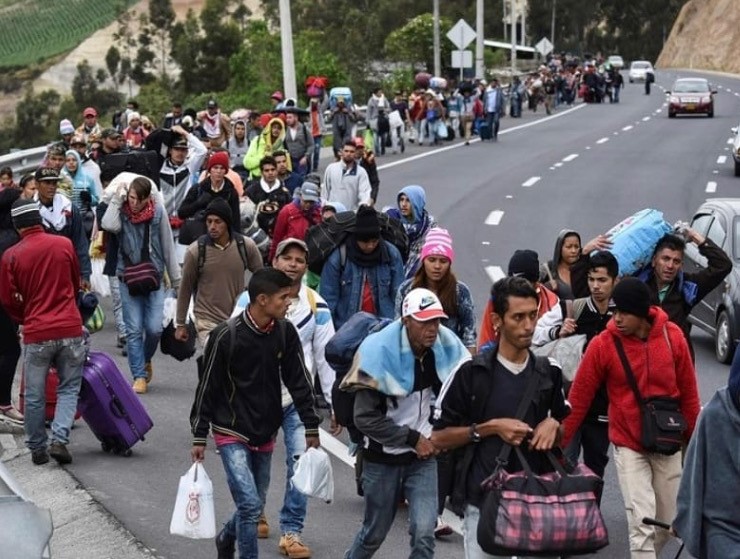 The pandemic has forced Venezuela’s women migrants to seek out sex work as a means to survive. With nothing to eat or to support their children back in Venezuela, they are charging as little as $2 for sex in foreign countries according to women’s right protector Karina Bravo.

Since the beginning of the crisis, Venezuela’s women have had to look for creative ways in which they can still provide food for their children and themselves. According to the United Nations Refugee Agency (UNHCR), an estimated 6.5 million will flee the South American country by the end of 2020; 4.5 million have emigrated already. Walking miles and miles away, they gained the name of the Walkers (Los caminantes) as they cross frontiers and reach their destinations. Yet, due to the current coronavirus pandemic, they have received eviction from Colombia (where Venezuelans are half of the workforce), Ecuador and Peru.

Now, they are on the streets, with no source of income or food to provide for themselves and their families. As a result, at the start of the COVID-19 pandemic, the only option for many of Venezuela’s women was to either go back to their homeland before the borders closed–a country which unemployment, economic crisis, social crisis, food shortages, electricity and water shortages and a surge in crime and violence have obliterated–or become sex workers in a foreign country.

Women who are refugees are the most vulnerable to “labour and sexual exploitation, trafficking and violence.” Moreover, this is the truth for Venezuela’s women migrants, who have been emigrating from their country looking for a better quality of life for themselves and their families.

Prior to the Pandemic

Before the pandemic, Venezuela’s women migrants were already struggling, charging around $9 for sex in the hopes of sending money to their families back in Venezuela and sustaining themselves. However, because of the pandemic, they have had to charge as little as $2. Karina Bravo, a former sex worker in Ecuador and now a women’s right protector through the Latin American Network of Sex Workers, explained in an interview with The Guardian that the current conditions have led to Venezuela’s women migrants being unable to sustain themselves or send money to their families back home. On top of that, they are also facing trouble with available health services and experiencing emotional distress. These women also more frequently become victims of gender-based violence, including rape and stabbings.

Mothers are not the only ones to become sex workers; “girls as young as twelve” are part of the same fate, working for $1 an hour, according to Jana Lopez, a volunteer who is helping migrant families in Cucuta, the Colombian city bordering with Venezuela.

Even young Venezuelan women who applied for jobs in Trinidad and Tobago in the hopes of finding a better opportunity frequently become sex workers. This is a situation that is currently happening in Colombia, Ecuador, Peru, the Dominican Republic, Mexico, Trinidad and Tobago, and many other countries in which Venezuela’s women migrants have emigrated.

Indeed, there has been an increase in trafficking and sexual exploitation all over Latin America since the beginning of the pandemic, and it has become much harder for sex workers to find the help they need.

Yet, groups such as the Doctors Without Borders/Médecins Sans Frontières (MSF) are still working to provide medical and preventive care, and mental health counseling services to sex workers in La Guajira, Colombia, most of whom are Venezuelans. All the organization’s services are free and it provides STDS tests, treatment, contraception, prenatal care, vaccinations and nutrition support. Since 2018, it has been providing immigrants with essential lifecare services which they cannot always access in their own countries.

Church organizations and networks are also operating near frontiers in order to help vulnerable immigrants and refugees who frequently become prey to trafficking and prostitution. However, an extreme urgency to expand more services to immigrants and refugees during the pandemic still exists so that they do not fall into the chains of sexual exploitation.