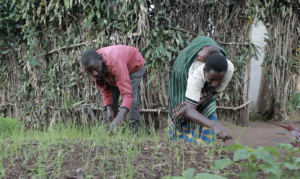 Rwanda is a small landlocked country in the center of Africa. With a sprawling savanna in the east and mountainous jungle in the west, the country has impressive natural features that have increasingly drawn international intrigue. Beyond Rwanda’s natural wonders, there have been great strides to combat poverty in Rwanda since the 1994 genocide in which 800,000 people died in 100 days. While the country faces substantial obstacles, there are many positive indicators of Rwanda’s future economic stability.

Over the last two decades, Rwanda has shown an average annual GDP growth rate of 7%; this is consistently above the average in Sub-Saharan Africa. Another promising factor is that Rwanda has an increasingly diverse economy. Traditional sectors, such as agriculture and services, are contributing alongside emerging sectors, such as electricity, infrastructure and construction. Tourism has also been a key factor and now contributes to 10% of the national GDP.

Due to these economic advances, Rwanda has become the darling of the World Bank. The World Bank consistently invests hundreds of millions of dollars in public improvement projects in areas ranging from education to renewable energy. The results of those projects are promising. From 2009 to 2019 national electricity access jumped from 9% to 47%. Additionally, through the World Bank-supported Rwanda Urban Development Project, six cities have directly benefited from a massive increase in urban roads and stand-alone drainage.

Poverty in Rwanda is still significant; around 38% of the population was living below the poverty line as of 2016. One contributing factor is that Rwanda suffers from a poor education system where only 68% of first-graders end up completing all six years of primary education. Another component is that domestic private investment in Rwanda has yet to take off, mainly due to low domestic savings. Additionally, many rural Rwandans operate subsistence farms and thus have little disposable time and income.

According to The Washington Post, the authoritarian streaks of Rwanda’s President, Paul Kagame, are another hindrance to the alleviation of poverty in Rwanda. In recent years, tourists have marveled at the clean streets of Rwanda’s cities. What those tourists cannot see, is the forced removal of “undesirables” into detention centers.

In rural areas, the government has burned farmers’ fields because they did not grow their assigned crops. Rural residents have also had to deal with Kagame’s heavy-handed approach to modernization. In some villages, Rwanda’s regime has stripped villagers of their grass roofs with the promise they would return with metal replacements. When the new roofs do not come residents live in exposure which leads to illness and fatalities.

Some of Kagame’s policies have drawn international outrage. In 2012, Kagame supported Congolese rebels which resulted in the United States and the European Union suspending international aid. Another similar scenario may be on the horizon with recent reports of Kagame’s regime manipulating poverty statistics.

In 2019, a Financial Times analysis of poverty statistics found that the government was misrepresenting data to exaggerate the decrease in poverty. Despite that claim, the World Bank has continued its myriad of investments in the country and so have many other major donors. However, as countries on a global scale focus more resources domestically due to the COVID-19 pandemic, international aid to Rwanda is in danger. Aid is still necessary to prevent catastrophic consequences as Rwanda is experiencing a dire humanitarian situation. The silver lining is that many of Rwanda’s usual donors are still in positions to assist.

The pandemic has also adversely affected tourism and exports, which are huge pillars of the Rwandan economy. Furthermore, as the country directs its healthcare workers and fiscal resources towards emergency response, other health concerns, such as the AIDS epidemic, move to the sidelines.

Hope for Poverty in Rwanda

Though Rwanda has problems that it cannot easily solve, there still is hope. Before the pandemic, Rwanda’s economic growth exceeded 10% in 2019. A two-thirds drop in child mortality and near-universal primary school enrolment accompanied this statistic.

Additionally, two World Bank-funded projects including the Rural Sector Support Program, and the Land Husbandry, Water Harvesting and Hillside Irrigation Project have increased the productivity and commercialization of rural agriculture. As a result, maize and rice yields doubled and potato yields tripled between 2010 and 2018. These results are especially promising considering poverty in Rwanda is the most severe in rural areas.

Rwanda has also achieved a strong level of political stability. Women make up 62% of the national legislature and previously marginalized opposition parties have gained parliamentary seats without disrupting the system’s stability. These are indicators that will increase confidence in foreign investors. While Rwanda has a troubled history, the future holds a lot of potential.